Tottenham will be looking to close-in on the top three when they take on Brighton this evening. Here is the side we think Pochettino will select

Tottenham Hotspur will be looking to close-in on the top three when they take on Brighton at the Amex Stadium this evening.

Goalkeeper: Hugo Lloris would have been disappointed to concede three goals against Man City at the weekend but he’ll obviously still keep his place between the sticks tonight.

Defence: Pochettino is expected to rotate his starting eleven ahead of the FA Cup semi-final with Manchester United on Saturday evening so Serge Aurier should come in for Kieran Trippier at right-back.

The Spurs boss has confirmed Toby Alderweireld will be recalled to the squad so the Belgian international could make his first Premier League start of 2018 having lost his first team place.

Davinson Sanchez is likely to be the man to make way with Jan Vertonghen keeping his place while Ben Davies could start at right-back again as Danny Rose is still out with a calf injury.

Midfield: Mousa Dembele is expected to be rested ahead of the Man Utd clash so Moussa Sissoko could come in to make a rare start in midfield with Harry Winks still unavailable.

Eric Dier may also get a breather to protect him for the FA Cup semi-final so Victor Wanyama is likely to start in the holding midfield role tonight.

Attack: Ideally Pochettino would protect Harry Kane but the striker is gunning for the Golden Boot so I think we’ll see the England international start up front against Brighton.

Dele Alli could be rested while Erik Lamela is likely to drop out after starting against Man City at the weekend so Heung-min Son should be recalled in attack.

Christian Eriksen could keep his place but Lucas Moura may get a rare chance to impress in attack this evening. 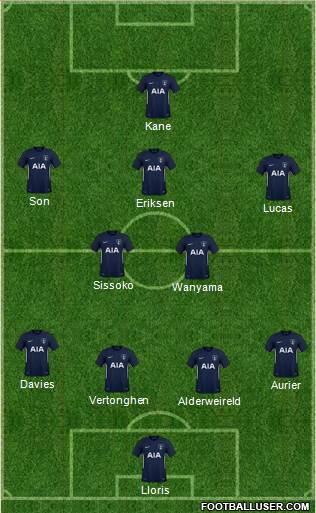