Tottenham kick-off the campaign with a trip to St James’ Park to take on Newcastle on Saturday. Here is the side we think Pochettino will select

Premier League football returns this weekend and Tottenham kick-off the 2018/19 campaign with a trip to St James’ Park to take on Newcastle United on Saturday. Here is the side we think Mauricio Pochettino will select for the game:

Goalkeeper: Hugo Lloris has only recently returned to pre-season training after helping France to World Cup glory and although he may not be 100% match fit yet, he should still start between the sticks tomorrow.

Defence: Toby Alderweireld is still at the club despite speculation surrounding his future throughout the summer but the Belgian international is unlikely to start this weekend.  Davinson Sanchez should keep his place in the back four and Pochettino may risk Jan Vertonghen despite the defender only recently starting his pre-season training preparations.

The Spurs boss says it will be impossible for him to start all of the late arrivals so Kieran Trippier may not be risked with Serge Aurier a more than able deputy at right back while Ben Davies will start ahead of Danny Rose on the left with the England international still being linked with a move abroad.

Midfield: Victor Wanyama has been ruled out with a knee injury while Harry Winks is also still working his way back from a long-term injury so Pochettino has few options in midfield.

Eric Dier’s fitness will be assessed before the game but I think we’ll see Moussa Sissoko starting alongside Mousa Dembele in the middle of the park as he’s featured heavily in pre-season.

Attack: Pochettino has hinted Harry Kane will feature at some point and I wouldn’t be surprised to see him start against Newcastle despite not being 100% match sharp.

Erik Lamela will miss the game due to a muscle injury while Dele Alli is unlikely to be risked from the start due to a lack of match fitness so we could see Lucas Moura handed a start on the right.

Christian Eriksen is certain to line-up in the middle of the park while Heung-min Son should get the nod to make it a familiar looking Tottenham side after they failed to make a single new signing during the summer window. 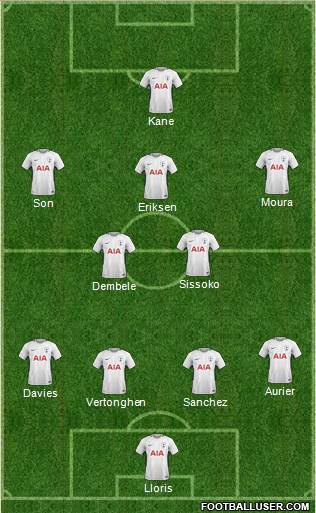