Manchester United are in talks with Fenerbahce over a deal to offload out-of-favour defender Marcos Rojo this summer, according to reports

The Premier League transfer window may be closed but European clubs can still buy from English teams so we’ll bring you all the latest gossip. Today, Man Utd are ready to offload Marcos Rojo… 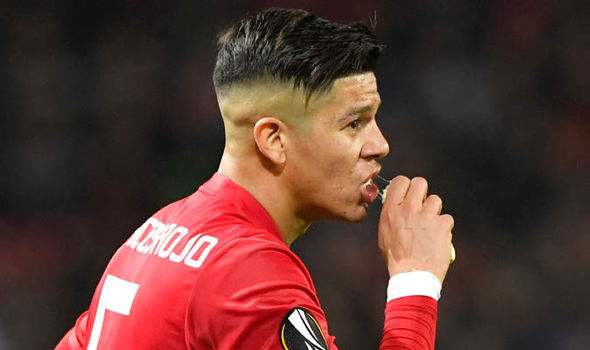 Manchester United are in talks with Fenerbahce over a deal to offload out-of-favour defender Marcos Rojo this summer, according to reports via the Mirror.

Rojo joined United from Sporting Lisbon in the summer of 2014 and has made over 100 appearances for the Manchester giants to help win the Europa League, FA Cup and League Cup over the past four years.

However, the Argentinean international was restricted to making just 12 appearances in all competitions last season and is going to find regular first team football hard to come by this year as he’s fallen well down Jose Mourinho’s pecking order.

United were in the market for a new centre-back this summer and Rojo is already behind the likes of Eric Bailly, Phil Jones, Chris Smalling and Eric Lindelof so he’s going to need to leave if he wants to be playing week-in, week-out.

A proposed switch to Everton failed to materialise last week but it seems Rojo could be heading to Turkey as the Mirror are citing a report from Fanatik that claims Man Utd are in talks with Fenerbahce over a potential deal.

The Turkish outlet says the Super Lig runners-up are hoping to sign Rojo on a season-long loan deal and United are ready to offload the 28-year-old defender over the coming days.

We’ll have to wait and see how things develop but Rojo wasn’t even named in United’s squad for their Premier League opening win over Leicester City on Friday night so a move makes sense this summer and it seems he could be on his way to Feberbahce.