Manchester United take on high-flying Watford at Vicarage Road on Saturday evening. Here is the line-up I think Jose Mourinho will go with:

Manchester United will be keen to build on their win over Burnley when they take on high-flying Watford at Vicarage Road on Saturday evening. Here is the line-up I think Jose Mourinho will go with:

Goalkeeper: David De Gea kept his first clean sheet of the season during the 2-0 win at Turf Moor and the Spaniard will be hoping for another shut-out against the Hornets tomorrow. Sergio Romero is back from a knee injury so he’s expected to return to the bench tomorrow.

Defence: United switched to a back four last time out and I think Mourinho will stick with that system tomorrow evening so we should see Antonio Valencia once again deployed at right-back.

Victor Lindelof could keep his place in the middle of defence but Eric Bailly is pushing for a recall so Chris Smalling may make way. Phil Jones hasn’t made the trip to Watford as he’s still nursing a hamstring injury.

Mourinho has a big decision to make at left-back as he insists Luke Shaw is available for selection despite suffering concussion while playing for England during the international break. However, I’d be surprised if they risked him so Ashley Young could get a recall.

Midfield: Nemanja Matic has made a successful return from an abdominal injury having started the last two matches so the Serbian international should keep his place in the middle of the park tomorrow.

Fred was dropped against Burnley and Marouane Fellaini put in an excellent performance in his place. However, the Belgian international is carrying a knock so Fred may be recalled alongside Paul Pogba this weekend.

Attack: Alexis Sanchez was back in the starting eleven last time out after being named on the bench against Tottenham and the Chilean international should keep his place in attack tomorrow.

Jesse Lingard seems to be ahead of the likes of Juan Mata and Anthony Martial in Mourinho’s pecking order so he could retain his place at Vicarage Road this weekend.

Marcus Rashford looked sharp playing for England during the international’s but he’s suspended tomorrow after being sent off against Burnley. Even if Rashford was available, I suspect he’d be on the bench as Romelu Lukaku is almost certain to lead the line up front. 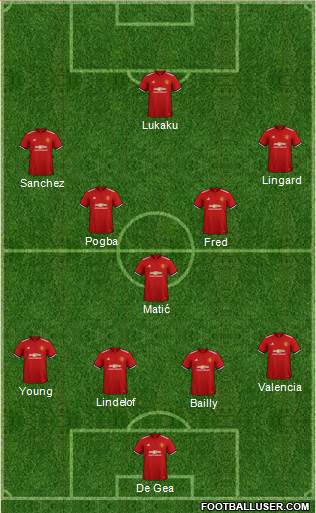