Manchester United take on Young Boys in Switzerland on Wednesday night. Here is the line-up I think Jose Mourinho will go with:

Manchester United will be looking to kick-off their Champions League campaign with a positive result when they take on Young Boys in Switzerland on Wednesday night. Here is the line-up I think Jose Mourinho will go with:

Goalkeeper: David De Gea enhanced his reputation as one of the best goalkeepers on the planet with another excellent performance during the win at Watford at the weekend. Mourinho is expected to rotate his team but I think De Gea is one player that will keep his place.

Defence: Antonio Valencia hasn’t travelled to Switzerland as United didn’t want to risk his troublesome knee on the artificial surface so Ashley Young is expected to move across to right-back.

Luke Shaw is set for a recall at left-back after missing the Watford game after suffering concussion while playing for England. Victor Lindelof and Chris Smalling are likely to continue to build a partnership in the middle of defence.

Eric Bailly may therefore have to make do with a place on the bench but Phil Jones remains out with a hamstring injury while Diogo Dalot could be in the first team squad for the first time since arriving in the summer.

Midfield: Marouane Fellaini has been excellent in midfield over the past two games but the Belgian international may be rested tomorrow with summer signing Fred getting recalled in the middle of the park.

If Mourinho is tempted to make further changes then Ander Herrera and Scott McTominay are options but I think we’ll see Paul Pogba and Nemanja Matic once again start in midfield.

Attack: There will be at least one change in attack as Jesse Lingard hasn’t travelled with the squad to Switzerland so Anthony Martial may be set for a recall while Alexis Sanchez should keep his place on the left side of the front three.

Mourinho has confirmed Marcus Rashford will start the game as he’s currently serving a three-match domestic suspension so we could see the England international up front on Wednesday night.

That would give Romelu Lukaku a well earned rest with the Belgian hitman recharging his battery’s ahead of Saturday’s league clash with Wolves at Old Trafford. 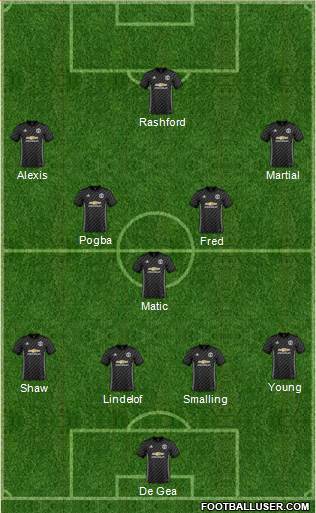