Tottenham take on Huddersfield at the John Smith’s Stadium on Saturday. Here is the side we think Mauricio Pochettino will select for the game:

Tottenham will hope to break in to the top four of the Premier League with a win when they take on Huddersfield Town at the John Smith’s Stadium on Saturday afternoon. Here is the side we think Mauricio Pochettino will select for the game:

Goalkeeper: Tottenham’s club social media account reported today that Hugo Lloris was still unavailable this weekend due to a thigh injury but Pochettino later told reporters at his press conference that there was still a slight chance he could be passed fit. However, I don’t think Spurs will risk the Frenchman so Paulo Gazzaniga should continue in goal as Michel Vorm remains out with a knee problem.

Defence: Serge Aurier is a major doubt after picking up a knock during the penalty shoot-out victory over Watford in the Carabao Cup last night but Keiran Trippier was expected to be recalled even if the Ivorian was fit while Danny Rose should replace Ben Davies at left-back.

Jan Vertonghen was rested for the League Cup tie last night so the Belgian international will be recalled on Saturday with Davinson Sanchez the man most likely to make way with Toby Alderweireld keeping his place.

Midfield: We should see changes in midfield as Harry Winks and Victor Wanyama are expected to drop to the bench after starting against Watford last night. That will pave the way for Eric Dier and Mousa Dembele to be recalled after being rested in the cup.

Attack: Spurs have received a huge blow ahead of the Huddersfield game after Christian Eriksen was ruled out with a minor problem that he picked up against Brighton & Hove Albion last week.

However, Dele Alli made his return from injury with a start in the Carabao Cup on Wednesday night and he got himself on the scoresheet from the penalty spot so I expect the England international to retain his place this weekend.

Harry Kane was given a well-earned breather against Watford so he’s certain to be recalled on Saturday with Erik Lamela favourite to make way despite scoring a fine goal last night.

Lucas Moura could keep his place in the attack while Heung-min Son is likely to get a recall with Moussa Sissoko dropping to the bench after making his first appearance since the opening weekend of the season. 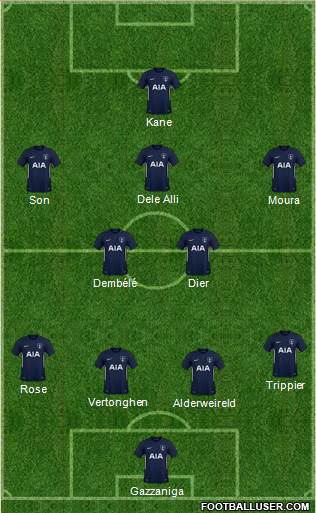