Tottenham will be without a number of players for Wednesday night’s clash with Barcelona. Here is the side we think Mauricio Pochettino will select

Tottenham are facing a mounting injury crisis as they’ll be without a number of key players for Wednesday night’s Champions League clash with Barcelona. Here is the side we think Mauricio Pochettino will select for the game:

Goalkeeper: Tottenham have been handed a timely boost as Hugo Lloris is fit and available for selection after recovering from a thigh injury. Paulo Gazzaniga will drop to the bench as Michel Vorm remains out with a knee problem.

Defence: Jan Vertonghen has been ruled out after picking up a hamstring injury during the win at Huddersfield on Saturday so Pochettino could revert to a back four with Davinson Sanchez alongside Toby Alderweireld.

Serge Aurier is once again missing due to a thigh injury that he sustained during the penalty shoot-out victory over Watford last week so Keiran Trippier should start at left-back with Danny Rose possibly keeping his place ahead of Ben Davies on the left.

Midfield: Tottenham will be without Mousa Dembele as the Belgian international suffered a thigh problem at the weekend so Harry Winks could come in alongside Eric Dier in the middle of the park with Victor Wanyama on the bench.

Attack: Spurs have problems in attack as Christian Eriksen remains out with a stomach issue that’s kept him out for the last two matches while Dele Alli has also been ruled out until after the international break with an on-going hamstring injury that he aggravated last week.

Hueng-min Son should keep his place in the attack while Lucas Moura may also retain his spot after an encouraging start to the new campaign and I wouldn’t be surprised to see Erik Lamela coming in to the side as he tends to save his best form for Europe.

Harry Kane was back among the goals after scoring twice during the victory at Huddersfield on Saturday and the England international will be a key player if Tottenham are to get a positive result tomorrow. 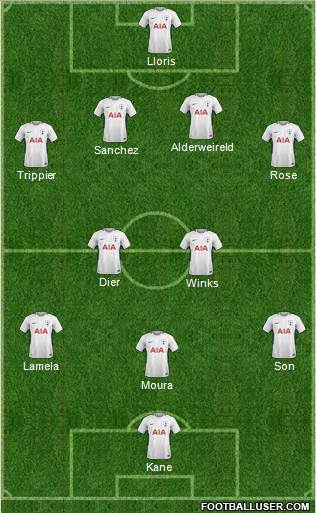