Tottenham Hotspur entertain Manchester City at Wembley on Monday night. Here is the side we think Mauricio Pochettino will select for the game:

Tottenham Hotspur will be looking to make a statement of intent in the title race when they entertain Manchester City at Wembley on Monday night. Here is the side we think Mauricio Pochettino will select for the game:

Goalkeeper: Hugo Lloris has come under fresh criticism following his sending off against PSV Eindhoven in the Champions League last week but the French international is still expected to keep his place against Man City tomorrow night.

Defence: Jan Vertonghen is once again ruled out due to a hamstring injury that’s expected to keep him sidelined for at least another month so Davinson Sanchez should continue alongside Toby Alderweireld in the middle of defence.

Kieran Trippier has played a lot of football lately so Pochettino may be tempted to freshen things up with Serge Aurier coming in at right-back but Ben Davies is set to retain his place on the opposite flank as Danny Rose is still out with a groin injury that’s hampered him recently.

Midfield: Mousa Dembele played well against PSV last week but Pochettino may have reservations about playing the Belgian international twice in a week so he may drop out with Harry Winks getting a recall alongside Eric Dier in midfield.

Christian Eriksen appears to have fully recovered from an abdominal injury as he was in great form in the Champions League last week so he’s certain to keep his place – although Pochettino may be tempted to play him in a slightly deeper role to combat City’s attack.

Moussa Sissoko has been impressing when given the chance of late while Victor Wanyama is also pushing for a recall but I think they’ll both have to make do with places on the bench tomorrow night.

Attack: Dele Alli has been working on his fitness in recent days since returning to full training from a hamstring injury. He wasn’t involved against PSV last week but while I do think Alli will be named in the squad against City, I don’t see Pochettino risking him from the start so he’ll probably be named on the bench.

Erik Lamela has been in great form in the past few games so I think the Argentinean international will be recalled to the starting eleven tomorrow with Hueng-min Son dropping out.

Harry Kane is certain to lead the line up front once again and Tottenham will be looking for their talisman to produce the goods in front of goal if they’re to get a positive result against the defending champions. 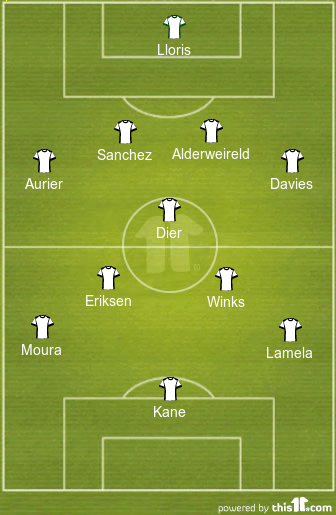