Tottenham welcome Wolves to Wembley on Saturday afternoon. Here is the side we think Mauricio Pochettino will select for the game:

Tottenham will be looking to close the gap on Liverpool with a win when they welcome Wolves to Wembley on Saturday afternoon. Here is the side we think Mauricio Pochettino will select for the game:

Goalkeeper: I don’t think there can be much debate over who’ll start in goal as Hugo Lloris is expected to once again line-up between the sticks with Paulo Gazzaniga named on the bench.

Defence: Pochettino is expected to rotate at the back with Kieran Trippier set for a recall at right-back after being rested during the comprehensive win over Bournemouth on Boxing Day. Kyle Walker-Peters put-in a solid display but the youngster will drop out while Serge Aurier could be back in the squad after returning to full training.

Juan Foyth returned to the starting eleven on Wednesday afternoon but the youngster may make way tomorrow with Davinson Sanchez coming in to start alongside Toby Alderweireld. Jan Vertonghen is still nursing a hamstring injury so he remains on the sidelines.

Midfield: Tottenham continue to have injury problems in midfield as Mousa Dembele is still short of fitness as he looks to return from an ankle problem in the New Year.  Victor Wanyama is also still working his way back to full fitness from a knee injury while Eric Dier remains out having had his appendix removed before Christmas.

Oliver Skipp is an option for Pochettino if he wants to freshen things up but I think he’ll stick with Harry Winks and Moussa Sissoko in midfield as they’ve been excellent in recent weeks.

Attack: Tottenham have been devastating in front of goal recently as the north Londoners have plundered 11 goals in their last two games against Everton and Bournemouth so Poch will be hoping that form continues tomorrow.

Hueng-min Son has been outstanding and it will be difficult to leave him out while he’s in such a rich vein of form so I expect the South Korean international to retain his place in attack.

Christian Eriksen should also start once again after another impressive run-out but Dele Alli is a major doubt after missing the Bournemouth game on Boxing Day with a hamstring injury.

Harry Kane is expected to once again lead the line up front and he’ll be hoping to boost his Golden Boot chances with at least one goal against Wolves. Erik Lamela is pushing for a recall so we could see him replace Lucas Moura in attack. 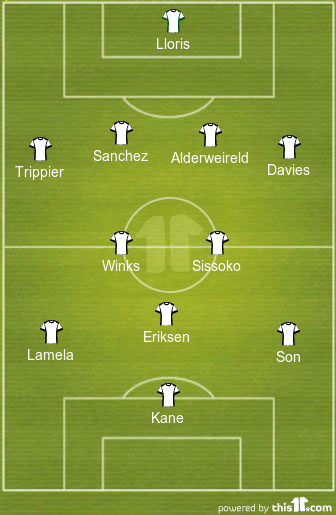