Tottenham take on Cardiff City in Wales on Tuesday evening. Here is the side we think Mauricio Pochettino will select for the game:

Tottenham will be looking to get back to winning ways when they take on Cardiff City in Wales on Tuesday evening. Here is the side we think Mauricio Pochettino will select for the game:

Goalkeeper: Hugo Lloris has been criticised for his part in two of the Wolves goals on Saturday but I still expect Pochettino to stick with him on New Year’s Day meaning Paulo Gazzaniga will once again have to make-do with a place on the bench.

Defence: However, the Tottenham boss may be tempted to freshen things up in defence following the 3-1 defeat at the weekend with Danny Rose expected to come in for Ben Davies at left-back. Serge Aurier is likely to be available after recovering from injury so he could replace Kieran Trippier at right-back. If Poch feels he’s not ready yet, then Kyle Walker-Peters could come in.

Jan Vertonghen is still out with a thigh strain but Juan Foyth made a successful return to action last week and he may be recalled alongside Toby Alderweireld in the middle of defence with Davinson Sanchez making way.

Midfield: Harry Winks and Moussa Sissoko have played a lot of football lately so ideally at least one of them would be rested against Cardiff but Tottenham are down to the bare bones in midfield and have been for some time so Pochettino has limited options to rotate.

Mousa Dembele is close to full fitness following an ankle injury but this game is likely to come too soon while Victor Wanyama is out with a knee injury and Eric Dier is still recovering after having his appendix removed. Youngster Oliver Skipp is an option but Pochettino may be reluctant to start him in a tricky away game so Winks and Sissoko may have to start yet again.

Attack: Harry Kane got himself on the scoresheet again on Saturday and the England international is once again expected to lead the line up front at the Cardiff City Stadium on New Year’s Day.

Christian Eriksen should keep his place in the side as Tottenham desperately need to get back to winning ways following their disappointment against Wolves while Dele Alli is also expected to start in attack.

Hueng-min Son has been in superb form of late but Pochettino may give the South Korean international a rest with Lucas Moura being recalled tomorrow evening. Erik Lamela missed the Wolves game with a calf problem and is unlikely to be available against Cardiff. 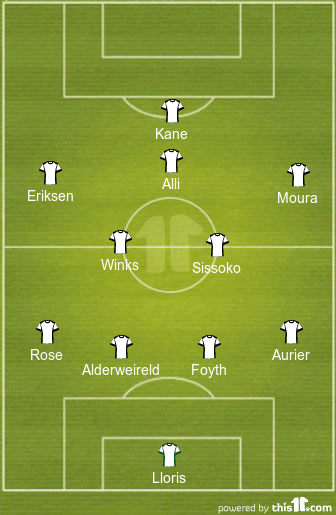