Tottenham take on Crystal Palace in the fourth round of the FA Cup on Sunday. Here is the side we think Mauricio Pochettino will select for the game:

Tottenham will look to bounce back from their Carabao Cup disappointment when they take on Crystal Palace in the fourth round of the FA Cup on Sunday afternoon. Here is the side we think Mauricio Pochettino will select for the game:

Goalkeeper: Paulo Gazzaniga is Tottenham’s ‘cup keeper’ and he played in third round win over Tranmere so we expect him to keep his place in goal after starting against Chelsea in the League Cup on Thursday night.

Defence: Tottenham could make some changes in defence as Ben Davies has been ruled out after picking up a groin injury against Chelsea so Danny Rose should be recalled at left-back while Kieran Trippier should replace Serge Aurier on the right after being rested at Stamford Bridge.

Toby Alderweireld has played a lot of football lately so Pochettino may be tempted to give him a rest. Davinson Sanchez is pushing for a recall so the Colombian international could come in alongside Jan Vertonghen in the middle of the back four.

Midfield: Eric Dier will be looking to put his penalty miss behind him and he should retain his place in the midfield holding role having recently returned from having his appendix out. Christian Eriksen could ideally do with a rest but Pochettino may be reluctant to field too weak a side after crashing out of the Carabao Cup so the Dane may keep his place but in a slightly deeper role.

Moussa Sissoko limped off against Chelsea with a knee injury and while he’s not yet been ruled out of the trip to Palace on Sunday, I don’t think Spurs will risk him from the start so youngster Oliver Skipp could come in.

Victor Wanyama is back in full training after recovering from a knee injury and he could be in the squad but Pochettino has hinted he won’t be ready to start just yet. Harry Winks has ran himself in to the ground lately so he may be rested.

Attack: Obviously Tottenham will continue to be without star striker Harry Kane as he’s been ruled out until March with an ankle injury while Dele Alli is also on the sidelines with a hamstring strain.

Hueng-min Son will be back soon after South Korea were knocked out of the Asian Cup but he’s still unavailable for this game so Pochettino has limited options to rotate too much in attack.

Fernando Llorente could continue to lead the attack up front after scoring against Chelsea while I expect Erik Lamela may keep his place after recently returning from injury.

Lucas Moura is pushing for a recall after making his injury return off the bench last night. Youngster George-Kevin Nkoudou is an option for Tottenham but I think he’ll be kept in reserve from the bench. 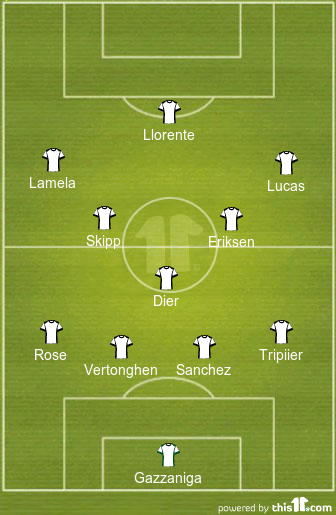