Here is our match preview ahead of Arsenal’s Europa League clash with Rennes including team news, expected line-ups and prediction

Arsenal will be looking to bring home a positive result from the first leg of our Europa League last-16 tie with Rennes this evening [5.55pm kick-off].

We booked our place in the last-16 after recovering from a first leg defeat to BATE Borisov to ease through 3-1 on aggregate and we’ll now take on a Rennes side that sit 10th in the Ligue 1 table so we should be confident of beating them over two legs.

They did show how dangerous they can be after beating Real Betis 6-4 in the previous round but Unai Emery has great experience in the Europa League so he’ll know not to take the task too lightly.

Arsenal head in to the game this evening off the back of a frustrating 1-1 draw with Tottenham at Wembley which saw us concede a controversial penalty before wasting a golden chance to snatch all three points when Pierre-Emerick Aubameyang miss a late spot kick.

That result has left us sitting fifth in the Premier League table – one point behind fourth-placed Manchester United – and we welcome the Red Devils to the Emirates on Sunday but our focus needs to be firmly on Rennes this evening.

Alexandre Lacazette misses the second game of his three-match suspension following his sending off in the first leg against BATE Borisov so Aubameyang is set to start up front.

Lucas Torreira is suspended in the league on Sunday so he’s expected to start in midfield while Ainsley Maitland-Niles could start at right-back with Stephan Lichtsteiner and Carl Jenkinson not making the trip. 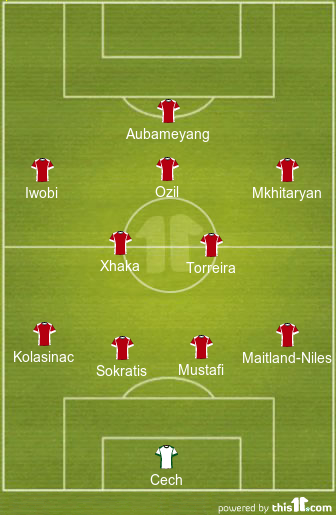 Rennes 1-2 Arsenal: We have an excellent record against French sides in European competition having beaten each of the last nine French teams we’ve faced and we’ve never lost an away game in France. Our form on the road has been patchy this season so I don’t expect this to be a walk over but I do think the boys will bring home a win which will set us up nicely for the second leg next week.