Tottenham have been dealt a double injury blow with Harry Kane set to miss the rest of the season while Dele Alli has broken a bone in his hand. 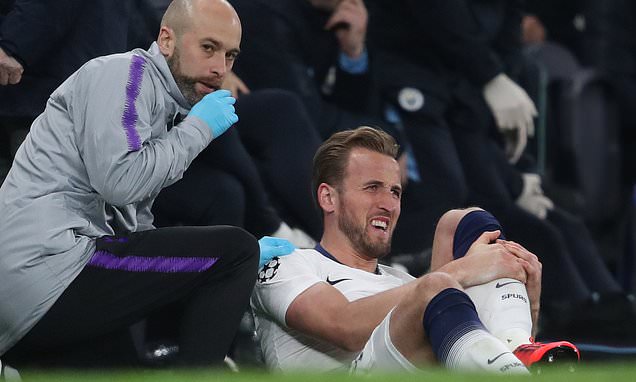 Tottenham have been dealt a double injury blow with Harry Kane set to miss the rest of the season while Dele Alli has broken a bone in his hand.

Kane limped off during the second half of Tottenham’s 1-0 victory over Manchester City in the first leg of their Champions League quarter-final at the New Tottenham Hotspur Stadium on Tuesday night.

The 25-year-old went in hard on City full-back Fabian Delph in the 55th minute but came off worse from the tackle and was seen leaving the stadium on crutches after the match.

Mauricio Pochettino confirmed after the game he was concerned Kane had damaged his ankle ligaments for the second time in a matter of months. The striker was out for around six weeks after hurting his left ankle against Manchester United back in January.

Sadly for Tottenham, scans conducted earlier today have confirmed their worst fears as the club have issued a statement on TottenhamHotspur.com stating that Kane has suffered ‘significant’ ligament damage.

The north Londoners don’t give any indication as to how long the striker will be on the sidelines for but the Daily Mail claim Kane will now miss the rest of the season and is facing a race against time to be fit for the Nations League in June.

In a double blow for Tottenham, the club have also confirmed that Alli suffered a fractured hand against Man City earlier this week and will need to be assessed to see whether he’ll be able to face Huddersfield Town on Saturday.

The statement on TottenhamHotspur.com read:

Following assessment over the past two days, we can confirm that Harry Kane has sustained a significant lateral ligament injury to his left ankle following a challenge in our Champions League quarter-final, first leg win against Manchester City.

Investigations are ongoing and he will continue to be assessed by our medical staff over the coming week.

We can also confirm that examinations have revealed that Dele Alli fractured his left hand during Tuesday’s fixture.

The England midfielder will now be assessed to determine his availability for this weekend’s fixture against Huddersfield Town.

The Daily Mail says the injury is very similar to the one Kane suffered back in January so he’s expected to be out for around six weeks meaning he won’t recover in time to play any part of Tottenham’s Premier League run-in.

However, given the fact Kane is a renowned quick healer, the newspaper says there is hope the striker might be able to recover in time to play in a potential Champions League final on June 1st, should Tottenham make it that far.

Kane’s injury will come as a major blow to Spurs as they face a huge fight to finish in the top four this season with Chelsea, Arsenal and Manchester United all battling-it-out for the final two Champions League qualification places.

The England hitman will also miss the Champions League second leg against Man City next week as well as both legs of any potential semi-final so Pochettino is going to have to find a way to make-do without his talisman for the rest of the campaign.