Tottenham take on Ajax in their Champions League semi-final this evening. Here is the side we think Mauricio Pochettino will select for the game:

Tottenham will be looking to secure a first leg advantage when they take on Ajax in their Champions League semi-final at the New Tottenham Hotspur Stadium this evening. Here is the side we think Mauricio Pochettino will select for the game:

Goalkeeper: Hugo Lloris has come under fire for some inconsistent performances in recent weeks but the Frenchman is still certain to keep his place ahead of Paolo Gazzaniga between the sticks tonight.

Defence: Tottenham have been boosted by the news that Jan Vertonghen was back in full training on Monday after missing the defeat to West Ham at the weekend with a muscle problem. The Belgian international is expected to be given an immediate recall to face his former side.

Pochettino went with a back four against West Ham but he may opt to revert to a back three/five against the Ditch giants. Davinson Sanchez could therefore keep his place along with Toby Alderweireld as they line-up alongside Vertonghen in defence.

Juan Foyth has been playing on the right recently but I think it’s safe to assume Kieran Trippier will be recalled tonight to start in the right wing-back role while Danny Rose is expected to get the nod on the left ahead of Ben Davies.

Midfield: Tottenham were given a major boost ahead of the game after Moussa Sissoko resumed full training on Monday after missing the last few matches with a groin injury. The Frenchman will be given a late fitness test but Pochettino will give Sissoko every chance to prove his fitness.

However, Harry Winks is unlikely to play again this season after having surgery on a troublesome groin injury. Victor Wanyama is pushing for a recall after being named on the bench against West Ham but Eric Dier may keep his place in the middle of the park.

If Sissoko is declared fit enough to start by the Tottenham medical team then Wanyama may have to settle for a place among the substitutes against Ajax this evening.

Attack: Tottenham will continue to be without star striker Harry Kane as he’s still nursing an ankle ligament injury that the England international sustained earlier this month.

Hueng-min Son would ordinarily deputise up front but the South Korean is suspended for the first leg this evening so Pochettino has a huge decision to make up front. Vincent Janssen is ineligible after not being included in Tottenham’s Champions League squad but Fernando Llorente is an option to lead the line up front.

However, I think Pochettino may opt to deploy Lucas Moura in a ‘false 9’ role with Dele Alli and Christian Eriksen supporting the South American in a fluid Tottenham attack.

Erik Lamela remains on the sidelines with a hamstring injury meaning Spurs won’t have many experienced attacking options on the bench so Pochettino may decide to keep Llorente in reserve as a game-changer in the second half. 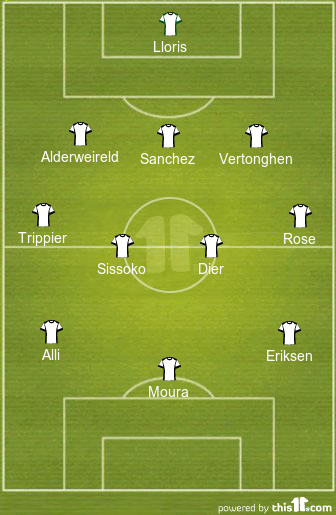