Tottenham need a win against Ajax in their Champions League semi-final second leg. Here is the side we think Pochettino will select for the game:

Tottenham need a win against Ajax in their Champions League semi-final second leg on Wednesday night if they’re to stand any chance of reaching the final. Here is the side we think Mauricio Pochettino will select for the game:

Goalkeeper: There isn’t too much to consider in goal as Hugo Lloris is almost certain to retain his place with Paolo Gazzaniga having to settle for a place on the bench once again.

Defence: Tottenham have been handed a major boost as Jan Vertonghen is set to return after missing the defeat at Bournemouth on Saturday with a head injury. The centre-back has trained successfully in recent days and will wear a face mask to protect a nose injury tomorrow night.

Vertonghen will replace Davinson Sanchez in defence as the Colombian international has been ruled out of the trip to Holland with a thigh injury. His absence means Tottenham are likely to set-up with a back four so Vertonghen would start alongside Toby Alderweireld.

Serge Aurier could be back in the squad after returning from a hamstring injury but Keiran Trippier is expected to keep his place at right-back while Ben Davies could come in for Danny Rose on the left if Pochettino wants to freshen things up.

Midfield: Harry Winks remains out with a groin injury but Victor Wanyama is pushing for a recall after being named on the bench for the defeat at Bournemouth at the weekend.

Moussa Sissoko is almost certain to keep his place in the middle of the park so Eric Dier would be the man to make way if Wanyama is recalled against Ajax.

Attack: Tottenham need to score at least one goal if they’re to stand a chance of reaching the final so Pochettino is expected to field an attacking line-up but he’ll have to once again make do without Harry Kane as he’s still working his way back from an ankle ligament injury.

Fernando Llorente is an option for Spurs but Hueng-min Son is expected to start up front and he’ll be desperate to make an impact after missing the first leg through suspension and being sent off against Bournemouth on Saturday.

Erik Lamela is back in the squad after recovering from a hamstring injury but a place on the bench is probably the best he can hope for as Lucas Moura should keep his place in attack.

Christian Eriksen and Dele Alli are also expected to retain their places in the Tottenham starting eleven so Lamela will be an attacking option from the bench along with Llorente. 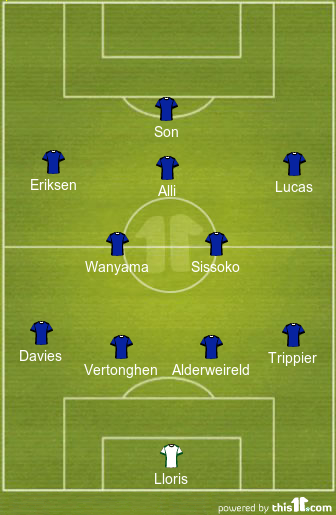