Arsenal face Liverpool at Anfield on Saturday in a highly anticipated match up between the two remaining teams yet to drop any points this season. Earlier in the week, manager Unai Emery joked ‘we’d rather not play Liverpool’ and although it was said in jest, there’s certainly an element of truth in there.

The Gunner’s record at Anfield is pretty poor, losing 5-1 on their last occasion and 4-0 on the trip prior to that. In fact, you’d have to go back to 2012 for the last time Arsenal won at Anfield. On that day in September, it was two new signings – Lukas Podolski and Santi Cazorla, with their first goals for the club – that secured the three points.

Since then, at least three Arsenal squad’s have grown and fallen apart, however, the current crop appears stronger than them all. The potential this Arsenal team has is proven via the vast array of options Unai Emery has at his disposal. With injury problems easing and the ability to switch between three or four at the back, Emery has a host of starting elevens to choose from. 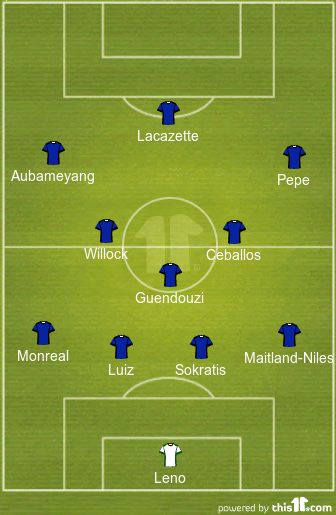 The first option sees Emery sticking with what’s worked thus far. The only change from the win against Burnley being to bring in record signing Pepe over youngster Reiss Nelson.

In his press conference, the Arsenal manager declared Pepe was ‘ready for more minutes’ and how could he not be tempted to test out his magical front three against Liverpool’s similar strike force of Mane, Salah and Firmino?

As to the midfield, Guendouzi and Ceballos were faultless against Burnley. In spite of this, Liverpool bring a whole host of different problems so Emery may be tempted to bring in Xhaka who’s returned to full fitness or the tenacious Lucas Torreria.

In regards to the defence, Emery could be willing to trust his back four to stop Arsenal’s unwanted record of shipping goals at Anfield. Three of the four defenders are vastly experienced and the manager would expect them  to organise one another. Nonetheless, we’ve seen in the past that if Liverpool’s attack turn up, it doesn’t matter who’s defending. 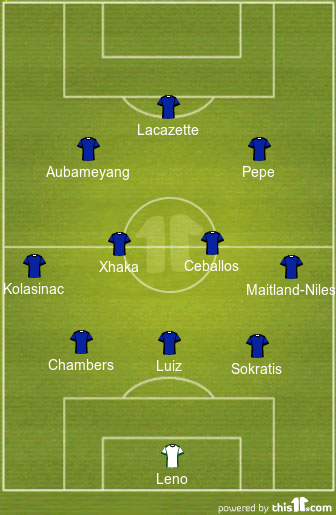 We’ve gone for the 5-2-3 over the 5-3-2 as it seems Emery would be keen to have his three forwards play together.  However, there’s certainly a chance that Laca could drop to the bench being replaced by Willock, Ozil or Guendouzi with Ceballos moving forward. These numerous minor changes on offer further reiterate how many possibilities Unai Emery has to play with.

Moving to five at the back will, in theory, shore up the defence and take responsibility away from Pepe and Aubameyang to track Liverpool’s full backs as Maitland-Niles and Kolasinac will pick up their forward bursting runs.

Calum Chambers could enjoy a welcomed return to the side, however, when playing with a back three, Arsenal’s flowing football can at times seem rigid. There’s no shame in adapting your game against Liverpool, yet, in Arsenal’s current form, it does feel as though there’s an opportunity to take the game to the European champions and get on the front foot.

In the middle, Xhaka could be too exposed and bringing in Guendouzi or even better Torreira may suit Arsenal better as they both have the capabilities to get around the pitch and break up Liverpool attacks.

Emery believes the players are just as comfortable playing with three or four at the back, however, with so many exciting options going forward, it would feel a shame to drop one of them for the sake of another centre back. 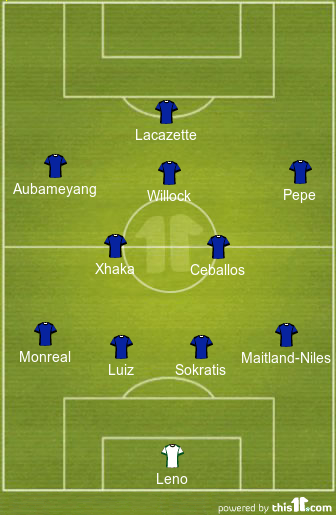 The 4-2-3-1 has similarities in personal to the 4-3-3 but gives Arsenal the possibility of having a more secure shield in front of the defence and would see them looking to pounce on the counter attack.

Xhaka would be more effective with Ceballos next to him and would be effective spraying the balls to Aubameyang and Pepe, allowing them to show off their pace.

However, with David Luiz and even Ceballos having similar skills, Arsenal could be better equipped with Torerria mopping up the danger and Ceballos waltzing through the ever energetic Liverpool midfield.

Up front, this formation might work against Aubameyang and Pepe who will be forced to use a hefty amount of energy focussing on Liverpool’s full backs while also leaving Lacazette isolated against Van Dijk and Gomes or Matip.

The chances of Mesut Ozil starting are slim due to his lack of game time, however, Ozil did put in a stellar performance against Liverpool at home last season. Would Emery trust him to do the same at Anfield? Probably not. But he’d be a welcome sight on the bench.

Instead of Ozil, it wouldn’t be surprising to see Joe WIllock get the nod in the no.10 role. Emery showed last season that if you’ve earnt your place then he won’t drop you due to your age and it would be a real sign of faith in the young Englishman which fans wouldn’t object to. Would Willock be able to perform? It’s a risk, but Emery would have no doubts about Willocks effort and desire.

Regardless of the team Emery selects, Arsenal will be in for a stern test on Saturday and there’s no doubt that everyone associated with the club would be happy with a point.

The main target will be not to concede a worrying amount of goals. Nevertheless, instead of fearing Liverpool, Emery would do well to remember he posses a striker on fire in Aubameyang, and a whole host of players keen on reeking revenge to a side which put them to shame last season.

Regardless, both teams will be looking forward to the game and with Liverpool and Arsenal on six points, they’ll both to eager to make it WWW.

It may be up in the air as to who will start, but one thing that’s for certain is that this game is not to be missed.