Tottenham take on Newcastle at the new White Hart Lane on Sunday afternoon. Here is the side we think Mauricio Pochettino will select for the game:

Tottenham will be aiming to build on last weeks draw with Man City when they take on Newcastle United at the new White Hart Lane on Sunday afternoon.

Goalkeeper: There is no point deliberating for too long over who’ll start in goal as Hugo Lloris is certain to retain the gloves unless he picks up a late injury. Pablo Gazzaniga will therefore have to make do with a place on the bench once again.

Defence: Jan Vertonghen has been left out of Tottenham’s opening two line-ups but Pochettino may feel this is a good opportunity to recall the Belgian international and give him his first start of the season. Davinson Sanchez is likely to be the man to make way so Vertonghen could line-up alongside Toby Alderweireld tomorrow.

Ben Davies is also pushing for a recall at left-back so Danny Rose may be given a breather but Kyle Walker-Peters appears to have established himself as Tottenham’s first choice right-back so Serge Aurier will miss out.

Juan Foyth is still on the sidelines due to an ankle injury while Ryan Sessegnon is still recovering from a hamstring complaint.

Midfield: Tottenham’s record signing of Tanguy Ndombele has been ruled out of the game against Newcastle after picking up a hamstring injury. The problem is only thought to be minor but it will be enough to keep the Frenchman out of this weekend’s clash.

Harry Winks should keep his place in midfield ahead of Eric Dier while Moussa Sissoko is also expected to retain his place in Pochettino’s starting eleven. Victor Wanyama won’t be involved as he’s in talks to join Bruges.

Attack: Tottenham have been boosted by the return of Hueng-min Son after he completed his three-match suspension that was carried over from last season following his dismissal against Bournemouth back in May. The South Korean international is expected to be given an immediate recall in attack.

Christian Eriksen should keep his place in the attacking midfield position with Giovani Lo Celso given more time to adapt to life in the Premier League before he’s thrown in from the start.

Dele Alli will be handed a late fitness check today but Pochettino is unlikely to take any risks with the attacking midfielder as he’s only recently returned to training following a niggling hamstring problem.

Harry Kane will obviously lead the line up front once again while I think Lucas Moura could be recalled in place of Erik Lamela in the Spurs attack tomorrow afternoon. 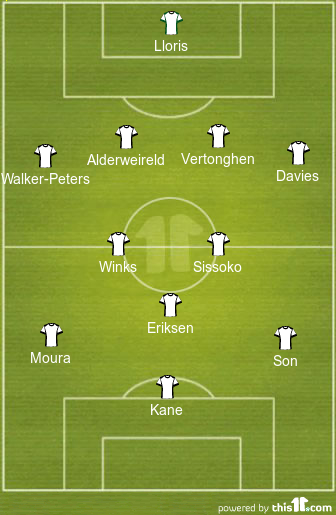