Tottenham begin their Champions League group stage campaign with a trip to Olympiakos. Here is the side we think Pochettino will select for the game:

Tottenham begin their Champions League group stage campaign with a trip to Olympiakos tonight. Here is the side we think Mauricio Pochettino will select for the game:

Goalkeeper: I don’t see Pochettino rotating his goalkeepers in the Champions League so Hugo Lloris is expected to continue between the sticks with Pablo Gazzaniga on the bench.

Defence: Davinson Sanchez has travelled to Greece after recovering from a knock which kept him out of the win over Crystal Palace at the weekend. Pochettino may look to rest Toby Alderweireld so Sanchez could partner Jan Vertonghen in the middle of the Tottenham back four.

Danny Rose has been left in north London to rest while Serge Aurier also hasn’t made the trip to Athens so Spurs will change both full-backs this evening. Ben Davies is set for a recall at left-back while Kyle Walker-Peters could come-in at right-back after recovering from a hamstring issue.

Juan Foyth is back in full training after an ankle problem but is still lacking fitness while Ryan Sessegnon didn’t make the travelling squad as he continues to work his way back to full fitness from a hamstring injury.

Midfield: Tottenham’s record signing Tanguy Ndombele is pushing for a recall after making his return from a hamstring problem with a cameo appearance off the bench against Crystal Palace on Saturday.

Harry Winks is likely to keep his place ahead of Eric Dier in midfield but Moussa Sissoko could make way if Pochettino decides to bring Ndombele back into the starting eleven tonight. Victor Wanyama is also an option but a place on the bench is the best he can hope for.

Attack: Spurs are likely to freshen things up in attack with Christian Eriksen in-line for a breather so Dele Alli is expected to be recalled after being named among the substitutes at the weekend. The England international is still trying to regain full match sharpness following injury so I think Pochettino will take this opportunity to give him some minutes.

Lucas Moura will be hoping to get a recall and he may replace Erik Lamela in the Tottenham attack but Giovani Lo Celso remains on the sidelines as he continues to recover from a hip injury that he sustained while on international duty earlier this month.

Hueng-min Son should keep his place after scoring a brace at the weekend and the South Korean international will once again support Harry Kane in the Spurs front-line. 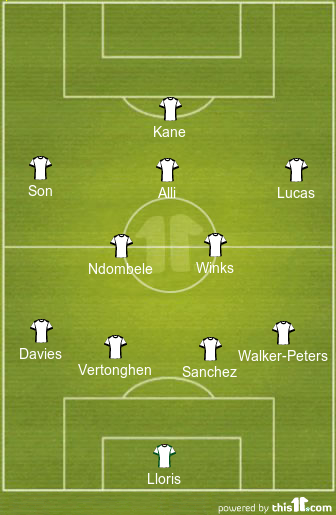