Arsenal take on Aston Villa at the Emirates on Sunday afternoon. Here is the side Gooner Mac thinks Unai Emery will select for the game:

Arsenal will be desperate to get back to winning ways in the Premier League when they take on Aston Villa at the Emirates on Sunday afternoon. Here is the side Gooner Mac thinks Unai Emery will select for the game:

Goalkeeper: Emi Martinez certainly took his chance to impress after putting in a fine performance during Arsenal’s win over Eintracht Frankfurt on Thursday night but I still think he’ll have to do more to displace Bernd Leno. Therefore, the Germany is likely to be recalled on Sunday.

Defence: I expect Emery to make a couple of changes in defence, despite Arsenal keeping a rare clean sheet in Germany. Calum Chambers and Shkodran Mustafi did well enough against Frankfurt but Ainsley Maitland-Niles is still likely to be recalled at right-back with Sokratis coming in to partner David Luiz after they were rested in the Europa League.

Sead Kolasinac limped off during the latter stages of the game last night but Emery said after the match that it wasn’t serious and he’s expected to be fit to start for Arsenal against Aston Villa on Sunday.

Rob Holding travelled to Germany but wasn’t involved in the matchday squad so it looks like Emery might be saving him for the League Cup clash with Nottingham Forest next week. Hector Bellerin and Kieran Tierney will play for the U23s this evening so they still aren’t available for the first team just yet.

Midfield: Despite his questionable form, Granit Xhaka continues to be one of the first names on Emery’s team sheet so he’s expected to start in the deep midfield role once again this weekend.

Joe Willock was excellent against Frankfurt but I think he’ll be given a breather with Matteo Guendouzi recalled. Lucas Torreira also impressed in the 3-0 victory on Thursday but I wouldn’t be surprised to see Dani Ceballos brought in to start in a midfield three.

Attack: Emery went with a diamond during the 2-2 draw at Watford last weekend but he may be tempted to alter that system slightly on Sunday afternoon as it hasn’t worked when used this season. Even if he does persist with it, I don’t think the personnel will change.

Bukayo Saka was outstanding against Frankfurt and many feel he deserves to keep his place but I think Emery will be cautious with the teenager. He may get a place on the bench against Villa but I still think Mesut Ozil will be recalled to start after being ‘rested’ for the trip to Germany.

Obviously Arsenal will once again be without Alexandre Lacazette as he’s still nursing an ankle injury but thankfully Pierre-Emerick Aubameyang came through the Frankfurt game unscathed so he should keep his place up front.

Nicolas Pepe is still adapting to life at Arsenal following his big-money move in the summer but the Ivorian is likely to be recalled to start with Ozil and Aubameyang this weekend with Reiss Nelson named among the substitutes. 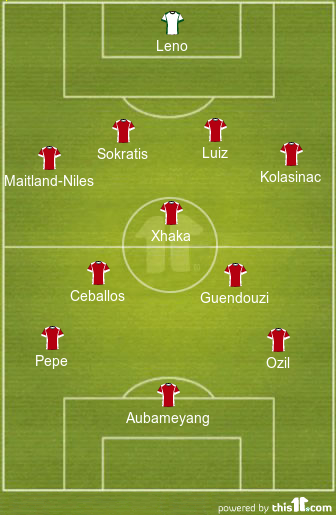