This is a match preview ahead of Arsenal’s Premier League clash with Crystal Palace at the Emirates including team news, line-ups and predicted score

Arsenal get back to Premier League action when they take on Crystal Palace at the Emirates on Sunday afternoon.

Unai Emery came under increasing pressure following a huge disappointing 1-0 defeat to Sheffield United at Bramall Lane last Monday night which has left Arsenal sitting outside the top four in the table.

Supporters have been left distinctly unimpressed by many of the performances this season and Arsenal were heading for another embarrassing defeat to Vitoria in the Europa League before Nicolas Pepe salvaged a 3-2 win with two superb late free-kicks.

Emery will be hoping the dramatic victory on Thursday night gives his players a confidence boost as they look to keep the pressure on the top four with a win over Crystal Palace tomorrow afternoon.

However, the Gunners shouldn’t be expecting an easy game as Palace head to the Emirates sitting just one place and one point behind Arsenal so Roy Hodgson will be keen to continue their excellent form with a positive result on Sunday.

Arsenal have virtually a fully-fit squad to choose from as Reiss Nelson is their only absentee with the attacker ruled out until November with a knee ligament injury.

Emery is set to make wholesale changes to his team after resting a host of players on Thursday night with the likes of Bernd Leno, Sokratis, David Luiz, Granit Xhaka and Pierre-Emerick Aubameyang expected to be recalled.

Hector Bellerin and Kieran Tierney both got ninety minutes under their belts in the Europa League but Emery is expected to bring Calum Chambers and Sead Kolasinac back into the full-back positions.

Nicolas Pepe will be in confident mood after his heroics in midweek and he’s set to start in the Arsenal attack but Alexandre Lacazette may drop out as he’s still working his way back to match fitness following an ankle injury.

Palace will make a late check on goalkeeper Vicente Guaita after he missed the Man City game due to a groin problem. Martin Kelly could return to the squad after overcoming his own groin complaint but Mamadou Sakho and Connor Wickham remain on the sidelines. 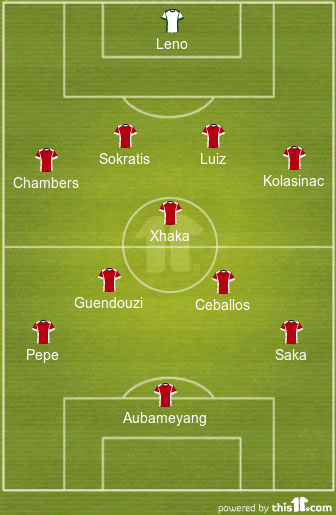 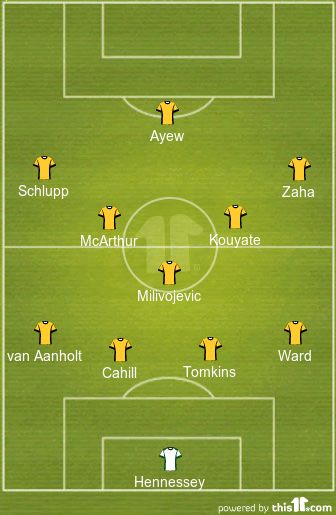 Arsenal 2-1 Crystal Palace: The Eagles have won two of the last five meetings with Arsenal and come into the game following an excellent start to the season so this certainly won’t be an easy game for the hosts. It’s difficult to know what we’re going to get from Arsenal as they’ve been so inconsistent this season but their home form has been terrific so I’m backing the Gunners to secure a 2-1 win tomorrow afternoon.