Tottenham take on Sheffield United at the New Tottenham Stadium on Saturday afternoon. Here is the side we think Mauricio Pochettino will select

Tottenham will look to get their Premier League campaign back on track when they take on Sheffield United at the New Tottenham Stadium on Saturday afternoon. Here is the side we think Mauricio Pochettino will select for the game:

Goalkeeper: Hugo Lloris has undergone another operation on his elbow injury and won’t be back until at least January so Paulo Gazzaniga will once again start between the sticks.

Defence: Jan Vertonghen has missed Tottenham’s last two games with a thigh injury so he remains a doubt this weekend. Toby Alderweireld should get a recall after being rested for the Champions League win over Red Star on Wednesday night. Eric Dier is the man most likely to make way as Davinson Sanchez should keep his place in the back four.

Serge Aurier is expected to be recalled at right-back with Juan Foyth dropping out while Ben Davies could replace Danny Rose at left-back if Pochettino opts to rotate both full-backs this weekend.

Midfield: Harry Winks didn’t make the trip to Serbia for Tottenham’s clash with Red Star in midweek so he’s expected to be recalled in the middle of the park against Sheffield United on Saturday afternoon.

Tanguy Ndombele put in a fine performance in the Champions League so he could keep his place in the Spurs midfield this weekend. Summer signing Giovanni Lo Celso scored during an excellent all-round display on his full debut for Tottenham on Wednesday night so he could retain his spot in midfield.

Moussa Sissoko may therefore miss out if Winks is recalled while Christian Eriksen may also have to settle for a place on the bench on Saturday as his form has been well below par this season.

Attack: Heung-min Son put the Andre Gomes leg break behind him with two goals in the Champions League last night so he’s expected to once again start in the Tottenham attack this weekend.

Harry Kane should also lead the line up front against Sheffield United having made a successful return from illness while Dele Alli may keep his place in attack with Lucas Moura having to settle for a place on the bench.

Ryan Sessegnon made a positive late cameo appearance off the bench against Red Star but he’ll continue to be eased into action so a place among the substitutes is expected this weekend. Erik Lamela is a major doubt with a thigh injury. 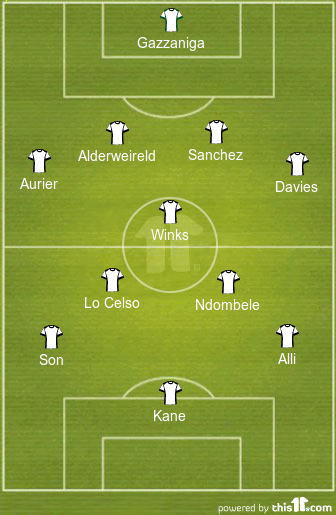