Liverpool take on Crystal Palace at Selhurst Park on Saturday afternoon. Here is the team we expect Jurgen Klopp to select for the game:

Liverpool take on Crystal Palace at Selhurst Park on Saturday afternoon. Here is the team we expect Jurgen Klopp to select for the game:

Goalkeeper: There is no point deliberating for too long over who’ll start in goal as Alisson Becker is certain to keep his place between the sticks with Adrian on the bench.

Defence: Liverpool are sweating over the fitness of Andy Robertson as the full-back is struggling with an ankle injury that he picked up during the 3-1 win over Manchester City before the international break. Robertson didn’t take part in full training on Thursday so looks unlikely to be fit and I don’t think Klopp will take any risks meaning James Milner could deputise at left-back.

Joel Matip is expected to once again miss out as he continues to recover from a knee injury that’s hampered him in recent weeks so Dejan Lovren is set to continue in the middle of defence.

Joe Gomez is nursing a minor knee problem but will have to settle for a place on the bench even if fit as Virgil van Dijk is certain to start while Trent Alexander-Arnold will keep his place at right-back for Liverpool.

Midfield: Naby Keita is pushing for a recall but I don’t think Klopp will want to mess with his midfield this weekend so the Guinean international may have to settle for a place among the subs along with Adam Lallana.

Jordan Henderson is expected to keep his place while Fabinho will occupy the holding role that he’s made his own this season. Gini Wijnaldum should also keep his place in the Liverpool midfield and he’ll be in confident mood after scoring a hat-trick for Holland on Tuesday night.

Attack: Liverpool will need to make a late decision over Mohamed Salah as he’s struggling to shake-off a troublesome ankle injury that’s hampered him for the past month. The Egyptian international didn’t take part in full training today and with so many games coming up, I don’t think Klopp will push the attacker so I don’t expect Salah to start at Palace.

Alex Oxlade-Chamberlain is the front-runner to come in for Salah as he’s been showing some great form lately. Divock Origi is another option but I wouldn’t be surprised to see The Ox given the nod this weekend.

Otherwise, it should be a familiar attack as Sadio Mane should once again start for Liverpool while Roberto Firmino will lead the line up front. Xherdan Shaqiri is close to making his return from a calf injury but a place on the bench is the best he can hope for on Saturday. 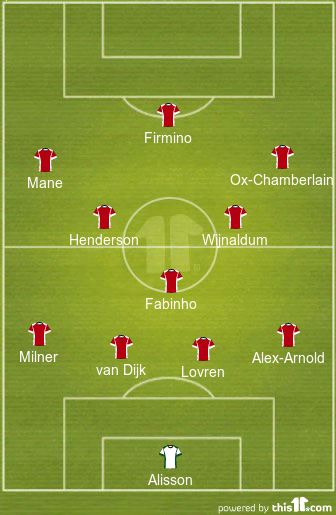