Jose Mourinho will take charge of his first game as Tottenham manager when they take on West Ham. Here is the side we think Mourinho will select

Jose Mourinho will take charge of his first game as Tottenham manager when they take on West Ham at the London Stadium on Saturday afternoon. Here is the latest team news and the side we think Mourinho will select for the game:

Goalkeeper: Hugo Lloris remains on the sidelines with a dislocated elbow while Michel Vorm is also unavailable for selection due to a calf strain so Paulo Gazzaniga will once again start between the sticks.

Defence: Mourinho is being tipped to deploy a 4-2-3-1 formation at Tottenham and Serge Aurier is favourite to keep his place at right-back ahead of Juan Foyth and Kyle Walker-Peters. Ben Davies has been ahead of Danny Rose in the pecking order for much of the season so he’ll be hoping to retain his place under Mourinho.

Jan Vertonghen remains a doubt for the trip to West Ham after only recently returning to training following a hamstring injury so Toby Alderweireld could come-in to join Davinson Sanchez in the middle of the back four.

Midfield: Eric Dier played in defence in Pochettino’s last game in charge but Mourinho will probably view him mainly as a central midfielder. However, it remains to be seen whether Dier will be a first team regular under the Portuguese coach as Harry Winks is expected to be ahead of him in the pecking order.

Winks was on the bench for Tottenham’s draw with Sheffield United last time out but I think we’ll see him recalled on Saturday as Tanguy Ndombele is a doubt with a groin injury that forced him off against the Blades two weeks ago.

Moussa Sissoko should keep his place in the middle of the park and we could see Christian Eriksen given a chance to impress his new boss. Mourinho is a known fan of the Dane’s so it will be interesting to see if the new manager can get Eriksen back to his best.

Attack: If Eriksen is recalled we may see Giovanni Lo Celso dropping to the bench as Dele Alli is expected to be an important player under Mourinho so he should keep his place in the Tottenham eleven this weekend.

Obviously Harry Kane will lead the line up front and Mourinho will be looking to the England international to be his main man in the Spurs attack while Hueng-min Son should also keep his place in the side.

Lucas Moura may therefore have to settle for a place on the bench along with Ryan Sessegnon but Erik Lamela remains out with a thigh injury. 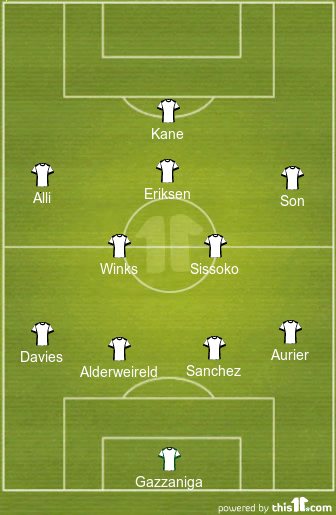