Liverpool get back to Premier League action when they take on Brighton at Anfield on Saturday. Here is the team we expect Jurgen Klopp to select

Liverpool get back to Premier League action when they take on Brighton at Anfield on Saturday afternoon. Here is the team we expect Jurgen Klopp to select for the game:

Defence: Liverpool are set to make at least one change in defence as Trent Alexander-Arnold will be recalled at right-back after being named on the bench for Wednesday night’s 1-1 draw with Napoli in the Champions League. Joe Gomez will make way while Andy Robertson should once again start at left-back.

Joel Matip remains on the sidelines as he’s still recovering from a niggling knee injury so Dejan Lovren should keep his place alongside Virgil van Dijk after scoring an important equaliser against Napoli.

Midfield: Liverpool have been dealt a major blow as Fabinho limped off on Wednesday night with an ankle injury. The Brazilian international left Anfield wearing a protective boot and while the full extent of the injury isn’t clear, Fabinho is almost certain to miss the visit of Brighton tomorrow.

James Milner could move into a defensive midfield role to deputise for Fabinho but I think Klopp might give Adam Lallana a chance as he’s been training in a deeper role this season and impressed in the position against Aston Villa earlier this month.

Gini Wijnaldum should be recalled after being rested in midweek while I think we may see Jordan Henderson given a rest ahead of next Wednesday’s Merseyside derby.

Alex Oxlade-Chamberlain is pushing for a recall in midfield but Naby Keita is another option for Klopp and I think the Liverpool boss might give the Guinean international a start this weekend.

Attack: Mohamed Salah came through the Napoli game unscathed after making his return from an ankle knock so he should keep his place in the Liverpool front three against Brighton.

Sadio Mane is also set to start on Saturday while Roberto Firmino should lead the line up front so the likes of Divock Origi and Xherdan Shaqiri will have to settle for places on the bench once again. 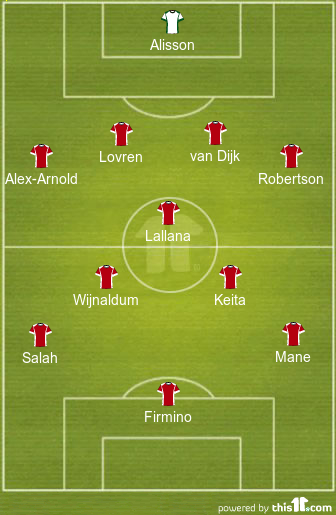