Manchester United take on Club Brugge at Old Trafford on Thursday night. Here is the line-up we think Ole Gunnar Solskjaer will select for the game:

Manchester United take on Club Brugge at Old Trafford on Thursday night. Here is the line-up we think Ole Gunnar Solskjaer will select for the game:

Goalkeeper: David De Gea was rested for the first leg draw and he’s expected to drop out again tomorrow with Sergio Romero coming-in between the sticks despite making an error for the Brugge goal in Belgium last week.

Defence: Solskjaer deployed a back four against Watford to good effect at the weekend and I think he’ll stick with that system tomorrow with Luke Shaw continuing at left-back ahead of Brandon Williams.

Aaron Wan-Bissaka should continue at right-back as Diogo Dalot may be used in the FA Cup at the weekend while Eric Bailly could come in to start alongside Harry Maguire with Victor Lindelof given a breather.

Midfield: Manchester United were handed a boost at the weekend as Scott McTominay made his comeback with a late cameo during the win over Watford having recovered from a knee injury. The midfielder could now be ready to start against Brugge tomorrow night.

Nemanja Matic is likely to be the man to make way if McTominay does start as Fred should keep his place after putting in some impressive performances in recent weeks.

Paul Pogba remains on the sidelines as he’s still working his way back from ankle surgery but Bruno Fernandes is likely to keep his place in the attacking midfield position after making an excellent start to his Manchester United career having arrived in January.

Attack: Odoin Ighalo is pushing to make his full debut after making an impression off the bench in the last few games. If Solskjaer gives Ighalo a start up front then Anthony Martial may be moved to the left wing.

Marcus Rashford remains on the sidelines as he’s still recovering from a back injury that could keep him out for the rest of the season so Mason Greenwood should continue on the right side of the United attack.

That would mean Daniel James is the man to drop to the bench where he’ll join the likes of Jesse Lingard and Juan Mata among the substitutes. 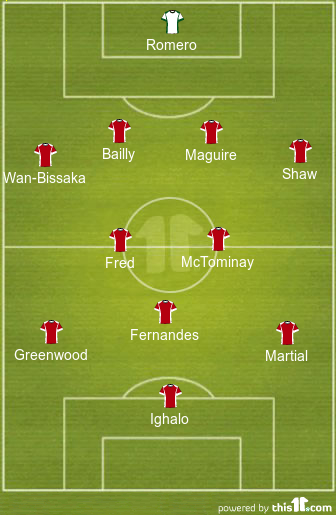