(Photo by Will Oliver – Pool/Getty Images)

Arsenal take on Leicester City at the Emirates Stadium on Sunday evening. Here is the team Gooner Mac expects Mikel Arteta to select:

Goalkeeper: Bernd Leno wasn’t at his best against Rapid Vienna on Thursday night after gifting them a goal but he will continue between the sticks this weekend with summer signing Alex Runarsson on the bench.

Defence: Gabriel was outstanding in midweek so the Brazilian centre-back should keep his place after an impressive start to his Arsenal career while David Luiz is likely to start as Rob Holding has been ruled out for three weeks with a hamstring injury.

Kieran Tierney was rested for the Europa League win so he should return on the left side of the defence with Sead Kolasinac the man to make way. Calum Chambers and Pablo Mari remain unavailable for selection but they are getting closer to full fitness.

Midfield: Thomas Partey was superb on his full Arsenal debut on Thursday night so the Ghanaian international should keep his place in the middle of the park against Leicester City tomorrow.

Dani Ceballos is back in contention after missing the trip to Austria with a bruised ankle but the Spaniard may have to settle for a place on the bench with Granit Xhaka expected to be recalled. Mohamed Elneny will drop to the bench.

Hector Bellerin should be recalled on the right flank with Cedric Soares making way following a disappointing outing against Vienna while Ainsley Maitland-Niles could come in for Bukayo Saka on the opposite flank.

Attack: Pierre-Emerick Aubameyang will obviously be recalled to the Arsenal attack after coming off the bench to grab the winner in Austria so Eddie Nketiah is likely to make way after a frustrating outing in the Europa League.

Willian will be handed a late fitness test after missing the Rapid Vienna game with a minor calf issue but the Brazilian should start on the right side if passed fit. Nicolas Pepe will be the man to make way if Willian is available.

Alexandre Lacazette was poor against Vienna and he didn’t look fully match fit but I still think Arteta will stick with the Frenchman up front against Leicester tomorrow evening. 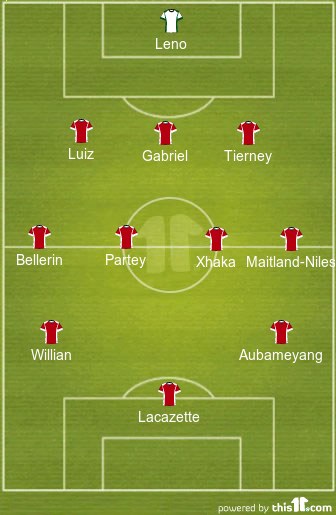