Manchester United will be out for revenge when they take on Istanbul Basaksehir at Old Trafford this evening.

After making a superb start to their Champions League campaign with impressive wins over Paris Saint-Germain and RB Leipzig, United slumped to a shock 2-1 defeat at Basaksehir before the international break so Ole Gunnar Solskjaer will want to make amends tonight.

Despite the defeat in Turkey, Man Utd still sit top of Group H on goal difference from Leipzig and three points clear of PSG, and with their nearest rivals playing each other in Paris, United will want to take control of the group with a win at Old Trafford.

Should Manchester United beat Basaksehir and Leipzig get a result at PSG then Solskjaer’s side would be on the verge of sealing their place in the knockout stages so this is an opportunity they won’t want to miss.

Basaksehir head to Manchester sitting bottom of the table with just three points from their three games but the Turkish outfit showed in the reverse fixture they shouldn’t be taken too lightly so they’ll be eyeing another shock this evening.

Manchester United will hand a late fitness check to Paul Pogba after he returned to training on Monday having missed the win over West Brom at the weekend due to a minor knock – although a place on the bench may be the best the Frenchman can hope for.

Luke Shaw remains out with a thigh injury so Alex Telles should continue at left-back while Axel Tuanzebe could come in for Victor Lindelof in the middle of defence as the Swede is struggling with a back injury.

Phil Jones remains out along with Eric Bailly while Jesse Lingard is self-isolating after coming into contact with someone who tested positive for covid-19. However, Donny van de Beek and Scott McTominay are pushing for recalls and Edinson Cavani and Daniel James could come into the United attack.

Basaksehir will still be without Junior Caicara and Enzo Crivelli due to injury but Rafael should start against his former club while Martin Skrtel and Demba Ba will also be up against familiar opposition tonight. 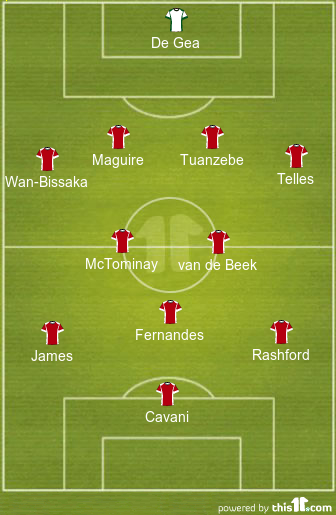 Man Utd 2-0 Basaksehir: Solskjaer will be demanding a much improved performance this evening as the Red Devils were extremely poor in Turkey. Another poor result and United will be dragged into a battle to qualify for the knockouts so the Norwegian coach won’t want another slip-up.

Manchester United have a great opportunity to take control of the group again and we don’t see them passing it up this time. Basaksehir will be keen to impress at Old Trafford but we predict a relatively comfortable 2-0 United win tonight.