Arsenal can book their place in the knockout stages of the Europa League with a win at Molde on Thursday evening. Here is the team Gooner Mac expects Mikel Arteta to select:

Goalkeeper: Arteta will want to wrap-up qualification early so Bernd Leno may start in goal with Alex Runarsson coming in for the last two group games if the Gunners secure top spot tomorrow.

Defence: Arsenal are likely to make changes in defence with David Luiz returning after missing the draw at Leeds United on Sunday to attend the birth of his daughter. Shkodran Mustafi should also come into the side with Gabriel and Rob Holding given a rest.

Kieran Tierney should also be given a breather but with Sead Kolasinac still self isolating, Ainsley Maitland-Niles could start at left-back while Cedric Soares should come-in for Hector Bellerin on the right side of the defence.

Midfield: Thomas Partey remains on the sidelines with a thigh injury that he sustained before the international break while Mohamed Elneny is still unavailable after testing positive for Covid-19 so Arsenal have limited opens in midfield.

That means Granit Xhaka is expected to keep his place while Dani Ceballos should also start against Molde. Youngster Joe Willock could be given another chance to impress after struggling to make an impression at Leeds on Sunday. The 21-year-old has saved his best form for Europe this season so hopefully he puts-in another good display tomorrow night.

Attack: Arsenal captain Pierre-Emerick Aubameyang’s struggles in front of goal continued with another poor performance last weekend so he’ll be given a rest in the Europa League.

Willian hasn’t made the trip after picking up a calf injury against Leeds while Bukayo Saka has also been ruled out after suffering a knee issue at Elland Road – although both players could return against Wolves on Sunday.

Reiss Nelson should get a start on the right wing while Nicolas Pepe could keep his place. The Ivorian was sent off at the weekend and will be suspended against Wolves so it makes sense for him to start in Europe. Arteta will be looking for a response after publicly criticizing the attacker for his dismissal.

Alexandre Lacazette is pushing for a recall after not featuring at the weekend but we think Eddie Nketiah will be given the nod to start for Arsenal through the middle while Emile Smith Rowe could feature off the bench. 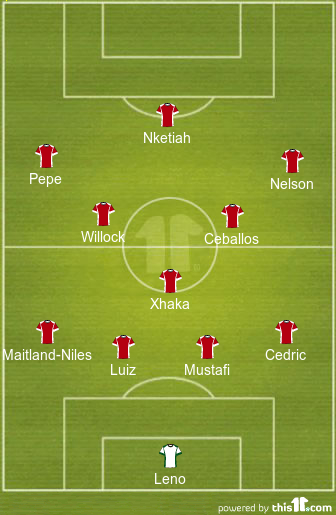