Liverpool take on Manchester United in a top of the table clash at Anfield on Sunday afternoon. Here is the team we expect Jurgen Klopp to select for the game:

Goalkeeper: Number one goalkeeper Alisson Becker is set for a recall after being rested for the FA Cup win over Aston Villa last time out so Caoimhin Kelleher will drop back to the bench.

Defence: Liverpool will make a late decision over Joel Matip after he recently recovered from an adductor injury but the centre-back took part in training on Friday so should be back in contention against Man Utd. Matip is likely to start alongside Fabinho in the middle of defence so Rhys Williams will drop out after his start against Villa.

We should see Liverpool make changes in the full-back positions as Andy Robertson will come in for James Milner at left-back after being rested for the FA Cup third round win while Trent Alexander-Arnold will replace Neco Williams at right-back.

Kostas Tsimikas is back in full training after recovering from a knee injury but he’s unlikely to feature tomorrow while Virgil van Dijk and Joe Gomez are still working their way back from serious knee injuries.

Midfield: Matip’s return in defence will also allow Jordan Henderson to start in his usual midfield position while Gini Wijnaldum should also keep his place in the middle of the park for the Liverpool.

Thiago Alcantara was rested against Aston Villa so the Spaniard should come in to start against Man Utd with Curtis Jones the man to make way. Alex Oxlade-Chamberlain will have to settle for a place among the substitutes.

Forward: Liverpool have no fresh injury concerns in attack so Mohamed Salah and Sadio Mane should both keep their places in the front three. Roberto Firmino was rested last time out so he’ll be recalled up front with Takumi Minamino making way.

Diogo Jota remains out with a knee injury but Klopp will still be able to call upon the likes of Xherdan Shaqiri and Divock Origi if he needs attacking reinforcements off the bench against United. 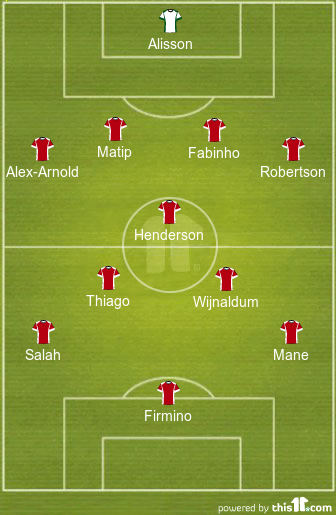