Arsenal take on Chelsea at Stamford Bridge on Wednesday night. Here is the team Gooner Mac thinks Mikel Arteta will select for the game

Goalkeeper: Bernd Leno should once again start between the sticks for Arsenal meaning Mat Ryan will have to settle for a place on the bench.

Defence: Kieran Tierney was rested for Arsenal’s win over West Brom on Sunday so he’s expected to be recalled. Bukayo Saka was excellent at left-back but he’s likely to move into a more advanced position if Tierney is recalled against Chelsea.

David Luiz continues to work his way back from a hamstring injury while Pablo Mari remains a doubt with an ankle problem so Gabriel is set to continue alongside Rob Holding in the middle of the Arsenal defence. Hector Bellerin could be recalled to replace Calum Chambers at right-back.

Midfield: Granit Xhaka has missed Arsenal’s last three matches due to a groin injury and it remains to be seen whether the Swiss international will be fit to return for the trip to Stamford Bridge tomorrow night.

If Xhaka is still out, then Mohamed Elneny may keep his place in midfield as Arteta will want to try and stifle the counter-attacking power of Chelsea.  Thomas Partey should be recalled after being rested against West Brom on Sunday which means Dani Ceballos could be the man to drop to the bench.

Martin Odegaard didn’t feature at the weekend so he’ll be fresh to return to the starting eleven for Arsenal tomorrow. Emile Smith Rowe played well on Sunday but he could be given a well-earned rest against Chelsea.

Attack: Arsenal should make at least one key change in attack as Pierre-Emerick Aubameyang is set to be recalled after being rested against West Bromwich Albion on Sunday afternoon.

Gabriel Martinelli failed to take his chance through the middle at the weekend so he’ll drop to the bench where he’ll be joined by Alexandre Lacazette and Eddie Nketiah.

Saka could start on the left side of the Arsenal attack against Chelsea while Nicolas Pepe may keep his place after scoring a superb goal at the weekend. Therefore, Willian may miss out despite scoring his first Premier League goal of the season on Sunday. 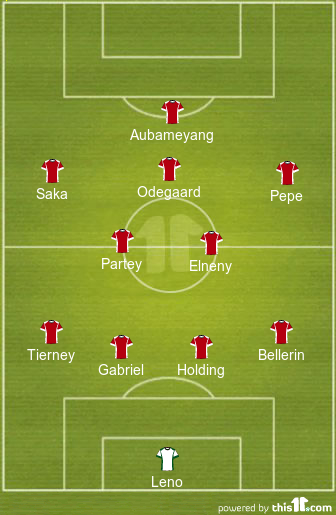