Chelsea kick off the new campaign when they take on Crystal Palace at Stamford Bridge on Saturday. Here is the team we expect Thomas Tuchel to select

Chelsea kick off the 2021/22 Premier League campaign when they take on Crystal Palace at Stamford Bridge on Saturday afternoon. Here is the team we expect Thomas Tuchel to select for the game:

Goalkeeper: Kepa Arrizabalaga was the hero in midweek as he came off the bench to win the penalty shoot-out for Chelsea in their Super Cup win over Villarreal. However, Edouard Mendy is still expected to start tomorrow.

Defence: Thiago Silva is lacking match sharpness so he’s unlikely to start against Palace. Kurt Zouma has featured during pre-season and started against Villarreal but Andreas Christensen is likely to be recalled to start in the back three.

Antonio Rudiger should keep his place in the Chelsea defence and while Nathan Chalobah has impressed during recent friendlies, Cesar Azpolicueta is expected to start against Crystal Palace this weekend.

Midfield: Reece James didn’t feature in midweek and is lacking fitness so he’s unlikely to be risked from the start. Therefore, Callum Hudson-Odoi could keep his place in the right wing-back position.

Ben Chilwell hasn’t played in pre-season after arriving back late following his exploits with England at Euro 2020 so Marcos Alonso is likely to get the nod on the left flank.

N’Golo Kante is set to miss out after picking up a knock against Villarreal on Wednesday night so Mateo Kovacic is set to start alongside Jorginho – who’ll be recalled after being on the bench in midweek.

Attack: Romelu Lukaku completed his big-money move to Chelsea on Thursday evening but he won’t be available this weekend as he’s still isolating as per Government guidelines.

Tammy Abraham is being tipped for a move following Lukaku’s arrival so a place on the bench is probably the best he can hope for tomorrow. Therefore, we could see Kai Havertz playing up front for Chelsea against Palace.

Hakim Ziyech has been ruled out with a shoulder injury that he sustained in midweek so Mason Mount could be recalled to start in attack if he’s deemed match fit.

Christian Pulisic is another option for Chelsea but he’s likely to remain on the bench with Timo Werner supporting Havertz up front. 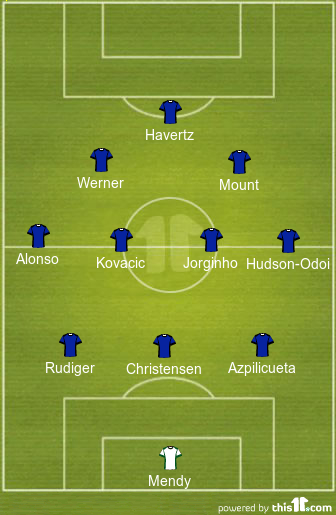