Arsenal get back to Premier League action when they take on Crystal Palace on Monday. Here is the team Gooner Mac thinks Mikel Arteta will select

Arsenal get back to Premier League action when they take on Crystal Palace at the Emirates Stadium on Monday night. Here is the team Gooner Mac thinks Mikel Arteta will select:

Goalkeeper: Aaron Ramsdale has impressed since being handed the first team spot and it looks like he’s now established himself ahead of Bernd Leno in goal so he’ll start once again on Monday.

Defence: Arsenal have found a settled back four so I don’t think Arteta will make any changes to the defence that started during the 0-0 draw with Brighton & Hove Albion before the international break.

Ben White is forming an impressive partnership alongside Gabriel while Kieran Tierney should once again start at left-back. Takehiro Tomiyasu has been excellent since arriving in the summer so he’ll continue at right-back with the likes of Rob Holding, Pablo Mari and Cedric Soares vying for places on the bench.

Midfield: Arsenal were dealt a major blow after Granit Xhaka was ruled out for an extended spell due to a knee ligament injury that he sustained during the 3-1 win over Tottenham last month. Xhaka is making good progress but he’s obviously not going to feature on Monday night.

Thomas Party is expected to be passed fit to start as he’ll have plenty of time to recover from his long-haul trip to Africa last week. Albert Sambi Lokonga started alongside Partey at Brighton but we could see Arteta switch things up slightly against Palace by moving to a more attacking formation.

That may see Martin Odegaard and Emile Smith Rowe lining-up in front of Partey in the middle of the park. We saw this system against Burnley earlier in the season so Arteta may use it again on Monday night.

Attack: The formation switch would free-up a spot in attack and Nicolas Pepe could be the beneficiary with the Ivorian recalled to start on the left flank. Gabriel Martinelli has been ruled out with a knock so 26-year-old Pepe is favourite to come in.

Pierre-Emerick Aubameyang should continue to lead the line up front for Arsenal meaning Alexandre Lacazette will have to settle for a place among the substitutes once again.

Bukayo Saka was on the scoresheet for England during the break so hopefully he continues his fine form. Saka is likely to start on the right wing for Arsenal against Crystal Palace as he’s been impressing in that role this season. 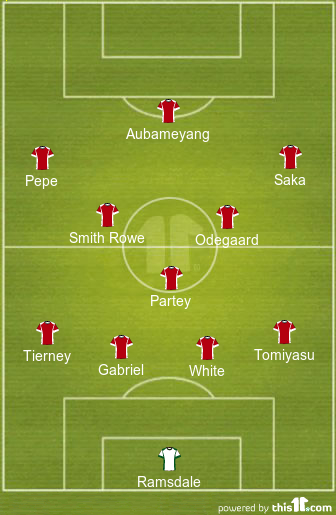