The Gunners are unbeaten in their last five league matches, but they have drawn the last two.

They were lucky to pick up a point against Crystal Palace after a last-gasp equaliser from Alexandre Lacazette.

Mikel Arteta will want a better performance against the Villans, who won’t be easy opponents.

The Midlands outfit did the double over them last term. It included a 3-0 win at the Emirates.

Here is how Arsenal could line up against Villa tomorrow.

Goalkeeper: Aaron Ramsdale produced a fine save before the interval against Palace, but he could have done better to deny the Eagles’ second goal. Irrespective of this, the 23-year-old is likely to continue between the sticks ahead of Bernd Leno, who now appears as the club’s cup goalkeeper.

Defence: No changes are likely in the backline barring any late injuries. Both Gabriel Magalhaes and Ben White will be eyeing an improvement in their performances, having allowed Christian Benteke and Odsonne Edouard the time and space to shoot on Monday.

The duo are expected to continue as the central defensive pairing. Takehiro Tomiyasu and Kieran Tierney are similarly automatic starters in the full-back roles. Tomiyasu was culpable for conceding possession against Palace which was unlike him. He also needs to step up tomorrow.

Midfield: Mikel Arteta made the surprise choice of playing Martin Odegaard in a central midfield role alongside Thomas Partey. Albert Sambi Lokonga was called up from the bench in the second half, but he had a difficult game.

Lokonga has earned plenty of plaudits from supporters, but he was largely responsible for the Eagles’ second goal (2-1) after being dispossessed in the opposition half. His slow-decision making cost the club dearly. Partey was likewise responsible for the opening goal, but the Ghanaian is unlikely to be dropped.

There is a high possibility that Partey could be accompanied by Odegaard once more.

Attack: Bukayo Saka is a big doubt for the game, having picked up an injury after a reckless kick from James McArthur. The England international could miss the game altogether which may pave the way for Alexandre Lacazette’s first league start of the season.

The Frenchman produced a lively performance off the bench that was capped with a dramatic 95th-minute equaliser. He may get the nod for the striker’s role with Pierre-Emerick Aubameyang slotting in the left-wing position in Saka’s absence.

The rest of the line-up could remain unchanged. Gabriel Martinelli also made his mark off the bench in the derby, but we don’t fancy him starting. Emile Smith Rowe could feature into his preferred number 10 role with Nicolas Pepe continuing on the right wing.

Here is how we think Arsenal could line up against Villa. 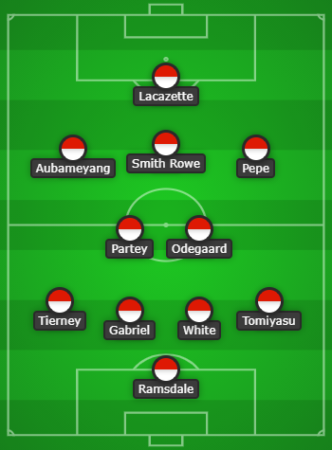