Manchester United finish-up a disappointing season when they take on Crystal Palace at Selhurst Park. Here is the line-up we expect Ralf Rangnick to select.

Manchester United finish-up a hugely disappointing season when they take on Crystal Palace at Selhurst Park on Sunday afternoon. Here is the line-up we expect Ralf Rangnick to select.

Goalkeeper: David De Gea is United’s established number one and he’ll retain the gloves tomorrow afternoon ahead of Dean Henderson.

Defence: Harry Maguire is expected to be recalled after making a full recovery from a knee injury. After shipping four goals at Brighton last time out, Rangnick is likely to recall Maguire to his starting eleven. Victor Lindelof could be the man to make way with Raphael Varane keeping his place in the middle of Man Utd’s defence.

Luke Shaw’s wife has just given birth to their second child so he’s set to miss out with Alex Telles keeping his place at left-back. Aaron Wan-Bissaka is being tipped to leave Old Trafford this summer but he may be given a final start with Diogo Dalot making way.

Midfield: Manchester United will once again be without Paul Pogba due to a calf injury so the French international has played his last game for the club as he’s set to leave when his contract expires next month.

Fred is expected to be recalled to start against Palace after being on the bench at Brighton. Nemanja Matic is likely to drop out with Fred starting alongside Scott McTominay. Bruno Fernandes should start in the attacking midfield role once again.

Attack: Juan Mata has played recently but the 34-year-old is expected to drop to the bench with Marcus Rashford pushing for a recall to the Man Utd side after recovering from illness.

Jadon Sancho will be assessed due to a minor knock but he’s expected to be fit to return to the starting eleven with Anthony Elanga dropping to the substitutes bench.

Cristiano Ronaldo will once again lead the line up front for the Red Devils so Edinson Cavani will have to make-do with a place on the bench. 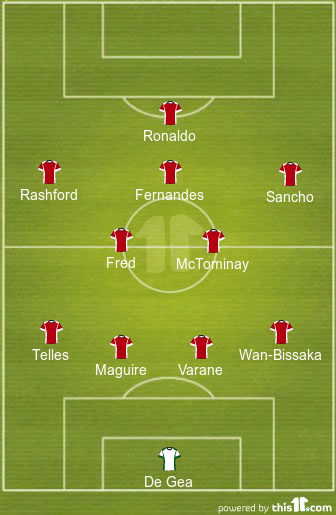