Arsenal Chase Midfielder But Missed Out On Keeper

After losing the transfer chase for Phil Jones to Manchester United, Arsenal and Arsene Wenger will not be wanting to lose another one. Rumour has it, they are after Shakhtar Donetsk’s 22 year-old attacking midfielder, Willian, with Wenger keen to… 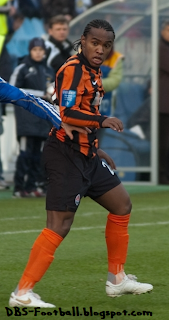 After losing the transfer chase for Phil Jones to Manchester United, Arsenal and Arsene Wenger will not be wanting to lose another one. Rumour has it, they are after Shakhtar Donetsk’s 22 year-old attacking midfielder, Willian, with Wenger keen to add to his squad.

Several members of his current side have decided to move on including Denilson and Bendtner, while speculation remains over the future of two slightly more important players, Nasri and Fabregas.

According to reports in The Sun, (who haven’t been hugely accurate recently considering they also reported that Tottenham would be willing to let go of Luka Modric for £20 million, only for Redknapp to announce he was not for sale at any price) Shakhtar would be willing to let Willian leave for Arsenal if Wenger sends Denilson in the other direction, along with around £4 million.

Wenger likes a bargain, and this looks like a sweet one, with the Ukranian side paying £11 million for Willian just four years ago. It should be noted though, that Willian only has one year left to run on his contract, which is probably the reason for such a low evaluation on the player who has been scouted by other Premier League clubs including Chelsea and Liverpool.

The player is known for his good passing and fluent style of play – a perfect fit then for Arsenal’s kind of football, while his quick dribbling two footed ability and the bonus of being able to chip in with a few goals here and there are attractive feature’s. He has scored 24 goals in 162 appearances in Ukraine, and helped Shakhtar Donetsk to the Champions League quarter finals last season.

Arsenal will have to move fast if they want him though, he is in high demand, and if they do lose out, it won’t be the first time in this window. It wasn’t just Phil Jones who chose another club over Wenger’s, but Brad Friedel too. Arsenal reportedly attempted to hijack Tottenham’s bid for the American late on in negotiations, but were told it was too far down the line to stop.

The mere interest in the experienced 40 year-old shows what Wenger is looking for, and it may mark the end of Manuel Almunia’s career at the Emirates. Wojciech Sczcesny seemed to have stamped his position as number one at Arsenal, but as Jens Lehmann looks set to leave Arsenal again, Wenger seems to be turning to experience as back up between the sticks.

Nevertheless, there is plenty of time left in the transfer window for Wenger to make his move. He may not be inspiring confidence in Arsenal fans who are impatient with Wenger’s youth and transfer policy and are agitated about another trophy less year, but there is still lots of time for Wenger to add to his squad.