Chicharito: Everything A Man Utd Fan Could Ask For 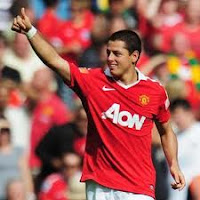 Chicharito, as he is commonly known as, spoke very highly of his first season in English football, but he also impeccably heaped praise on his Manchester United teammates.

To surpass all early expectations, Hernandez scored 20 goals in his first season at Old Trafford and now he has promised that he will add to that total and nobody can really doubt that, either.

Like Rory McIlroy, who is a self-confessed United supporter, showed at the 2011 US Open golf tournament, Hernandez is a great football because of how he conducts himself both on and off the field, which a sign of a true role model for all human beings – not just athletes.

To be successful, you must be not only a humble champion, but also be intelligent and appreciative in defeat. Nobody in their right mind enjoys the thought of losing, but to accept that you lost and funnel those emotions the proper way can only help you make amends for it at the next time of offering.

Rarely do you ever not see an exuberant, contagious smile on Hernandez’s youthful face. Now this sparks the very contrasting difference between him and some of the other young players in the world’s game – especially in the country he is playing in.

After playing the entire grueling season for United, Chicharito has nearly out done himself by scoring a further seven goals in the CONCACAF Gold Cup for his home country Mexico.

While Hernandez is enjoying his time with the El Tricolors, Arsenal’s Jack Wilshere chose to sit out of England’s European U-21 tournament because he was suffering from fatigue. Yes, the Gunners’ midfielder is only 19 and is already being said that he being overused by his manager – which is laughable and sad all at the same time.

Wilshere made 49 appearances for Arsenal this season – just four more than Hernandez, who was playing in a foreign country for the first time. The excuses being made by Wenger and Wilshere, himself, are selfish and is exactly why Arsenal have gone six years without a taste of success.

Professional footballers are so pampered these days – but Hernandez has never rested on his past praise, which is indicative of the club he plays for. The 23-year old is certainly polished beyond his years and his remarkable team understanding is remarkable. He said, “Our team has such soul and such spirit. Success is written into the DNA of this club. I’m at the best club in the world. Everything is done to succeed and win titles.”

Not only does he endear himself to the supporters, but Hernandez also knows how much hard work and effort it takes to succeed. When most players take a year or more to settle into the demands of English football or life at Old Trafford, Javier took it upon himself put in that little bit more effort. Hernandez hit the weights in the gym to cope with the physical requirements and he also put his listening cap on to hear what he need to do.

Sir Alex did not expect his £6million signing from Chivas to be the instant impact that he was, but he also did not fully understand desire of commitment that lived with him, either. Due to that breathe of fresh air personality, most people forget how Hernandez under performed against Barcelona, which he admit to himself and will surely learn from it.

Humbly, but yet so confident, Javier claimed, “Personally, I am extremely happy with my season, but I do not rest on my laurels. I want to do even better next season. I want to help this club to make history.”

If those words of professional from Javier Hernandez do not warm your heart then Manchester United does not run through your veins.