Bolton vs Chelsea – Chelsea currently third in the league take on Bolton Wanderers lying at the bottom of the league table. Chelsea endured a frustrating draw at Estadio Mestalla against Valencia after having dominated most of the game until conceding the late goal.

Bolton Wanderers themselves are having a very tough run after losing last five of their EPL games conceding 16 goals in those five games. Chelsea came of with a handsome 4-1 win over Swansea in their last EPL game but Bolton suffered yet another defeat after losing 3-0 to Arsenal.

Given the current form of both teams it appears that Chelsea shouldn’t have any problems of coming away with three points from the Reebok Stadium. AVB and the Chelsea team will definitely be up for it and expecting Chelsea to come off with three points with ease.

Fernando Torres begins a three-match ban, so either Didier Drogba or Nicolas Anelka will start up front. Frank Lampard might be back in the starting line-up after an impressive performance against Valencia which saw the midfielder scoring a well worked goal for Chelsea.

Daniel Sturridge who spent last 6 months of the 2010-11 EPL campaign at Bolton after being hired on loan could start against the team where he gained his confidence and scored good number of goals to help Bolton to be in the top half of the league table. Michael Essien is the only long term absentee for Chelsea.

Bolton midfielder Stuart Holden is likely to be sidelined for six months after a follow-up operation on a knee injury revealed cartilage damage.  David Wheater and Ivan Klasnic are both suspended, while Gael Kakuta is ineligible (on loan from Chelsea) and Jussi Jaaskelainen is doubtful with a leg knock.

Bolton have not breached our net at the Reebok for 12 ½ hours since Henrik Pedersen managed it in November 2002 during a 1-1 draw.

Our Last Meeting at Reebok 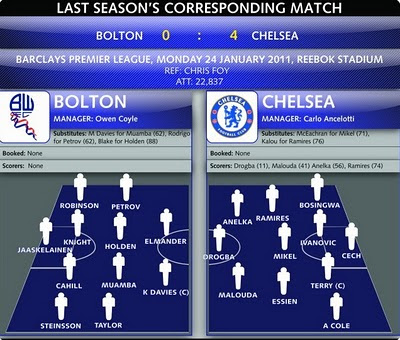 Bolton vs Chelsea – Put on your thinking hats and predict the scoreline for this match… Just LIKE our Facebook Fan page and predict your scores…who will score first for Chelsea.. and express your thoughts and opinions on the match…

My starting line up would be 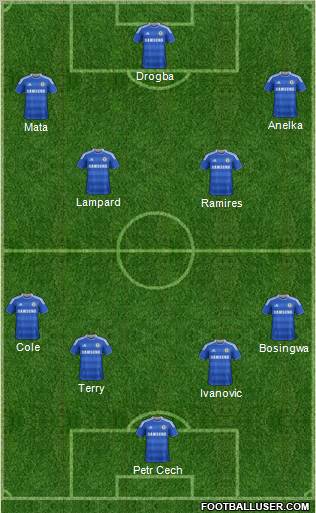