Tottenham take on Aston Villa in the third round of the Capital One Cup just 48 ours after beating Cardiff City in Wales. Here is my predicted starting eleven:

Tottenham visit Villa Park tonight to take on Aston Villa in the third round of the Capital One Cup just 48 ours after beating Cardiff City in Wales.

Boss Andre Villas-Boas has once again vented his frustration at being forced to play two games in such quick succession and feels his club hasn’t been given a fair chance of competing for the League Cup this season.

The Portuguese coach confirmed he’ll make wholesale changes for tonight’s game and the majority of the players who started against Cardiff will be rested.

Brad Friedel is expected to start in goal while Ezekiel Fryers and Younes Kaboul could come into defence along with new signing Vlad Chiriches – who’ll makes his debut if selected. Sandro is almost certain to start in midfield along with fellow subs from the weekend Lewis Holtby and Erik Lamela.

Jermain Defoe is struggling to be fit due to a groin strain so if he misses out youngster Harry Kane should be given the chance to impress up front. Etienne Capoue, Nacer Chadli, Aaron Lennon and Danny Rose all remain out through injury.

Here is my predicted starting eleven: 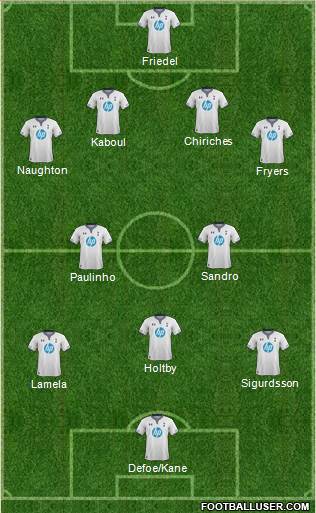 What do you think of the team? Agree? Share your own suggestion in the comments section below.