Tottenham Hotspur are in Russia to take on Anzhi Makhachkala this evening in the Europa League. Here’s a preview with team news and likely line-up for the game

Tottenham Hotspur are in Russia to take on Anzhi Makhachkala this evening (5pm kick-off) looking to maintain their winning start to their Europa League campaign.

Spurs kicked-off with a comfortable 3-0 win over Tromso at White Hart Lane two weeks ago so can take control of Group K with another win today.

However, they know they’ll be in for a tougher test against big spending Anzhi. The Russians have faced both Liverpool and Newcastle in recent years and were a difficult proposition, but they have lost key names like Willian and Samuel Eto’o this summer and are currently sitting second bottom of the Russian league, so Andre Villas-Boas will be quietly confident he’ll be able to come away with a positive result.

Villas-Boas has left Paulinho and Jan Vertonghen back in north London ahead of their clash with West Ham on Sunday and he’s expected to rotate his squad once again this evening.

Summer signings Erik Lamela and Nacer Chadli are likely to be given another chance to impress while striker Jermain Defoe is expected to lead the line after bagging a brace against Tromaso.

Midfidelder Lewis Holtby is also in line for a start alogn with Sandro and Kyle Naughton, while Vlad Chiriches could made his full debut. Etienne Capoue and Aaron Lennon remain sidelined through injury. 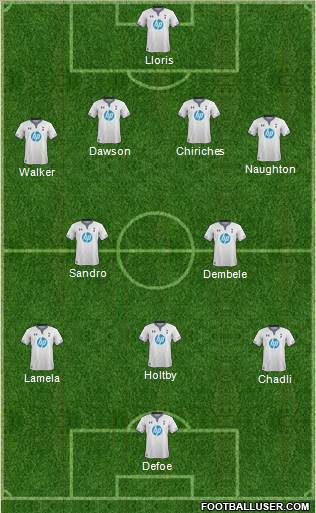 Lewis Holtby: The young German has slowly been finding his feet at White Hart Lane and showed glimpses of his undoubted quality. Tonight is an excellent chance for him to really show AVB what he’s got.

Anzhi 1-2 Spurs: While playing in Russia is never easy, Anzhi aren’t the force they were a couple of seasons ago and I feel Tottenham can nick this one to take a huge step closer to qualifying for the knockout stages.

What would your line-up be and whats your predicted score? Share your thoughts below.