Arsenal take on West Bromwich Albion at the Hawthorns on Sunday looking to cement their position at the top of the table. Here is a predicted starting line-up

Arsenal travel to the Midlands on Sunday to take on West Bromwich Albion at the Hawthorns looking to cement their position at the top of the table.

The Gunners head into the game in superb form, sitting top two points clear at the top of the Premier League following a 2-1 win away at Swansea City last weekend.

Arsene Wenger’s men also put in a stunning display to see-off Napoli 2-0 in the Champions League on Tuesday night so you’d expect the Frenchman to make limited changes to his line-up this weekend.

He will be forced into at least one change though, with right-back Bacary Sagna ruled out for three weeks with a hamstring strain picked up in midweek, so Carl Jenkinson will come in at the back.

The only other change I would like to see is Jack Wilshere replace Tomas Rosicky in attack. The Czech international made his first start in a month against Napoli but looked rusty so I’d prefer Wilshere to start and bring Rosicky on in the second half.

Otherwise it should be the same team that put in the excellent performance on Tuesday night. Here is the line-up I’d go with: 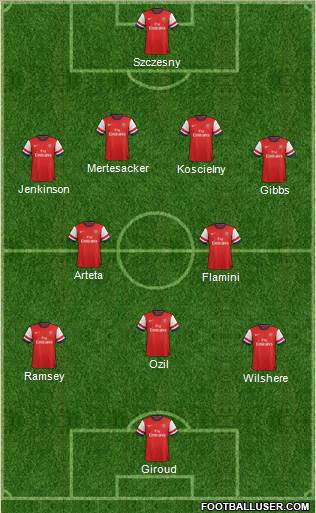 What do you think of the team? What would your preferred line-up be?