Tottenham get back to Premier League action when they welcome London rivals West Ham to White Hart on Sunday afternoon. Here’s the eleven we think will start.

Tottenham get back to Premier League action when they welcome London rivals West Ham to White Hart on Sunday afternoon.

Spurs warmed up for the game with a comfortable 2-0 away win to Anzhi in the Europa League on Thursday with boss Andre Villas-Boas making several changes to his side for that game.

Hugo Lloris, Kyle Walker and Moussa Dembele are the only three players expected to retain their places with Michael Dawson and Jan Vertonghen likely to be recalled in defence after being rested. Kyle Naughton played at left back against Chelsea last weekend and did an admirable job so should play once again with Danny Rose still unavailable.

Paulinho didn’t travel to Russia so is almost certain to start, as are Christian Eriksen and Gylfi Sigurdsson after making substitute appearances in midweek.

The big contentious point could be who starts up front. Roberto Soldado is yet to find his feet since making a big-money move from Valencia in the summer and Jermain Defoe has certainly given Villas-Boas food for thought with some goal-scoring display’s in Europe.

However, despite Defoe’s exploits in front of goal, it seems AVB prefers to stick with Soldado in the league so we expect the Spaniard to get the nod again this weekend. Here’s the eleven we think will start against the Hammers. 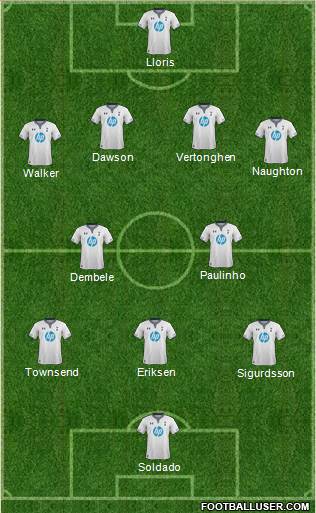 What do you think of the team? What would yours be?