Tottenham Hotspur take on FC Sheriff this evening looking to secure qualification to the knockout stage of the Europa League. Here’s a preview for the game.

Tottenham Hotspur take on FC Sheriff this evening (kick off 6pm UK time) looking to secure qualification to the knockout stage of the Europa League.

Spurs head into the game sitting top of Group K having having recorded comfortable victories over Tromso and Anzhi and another win today, coupled with a draw in the groups other fixture, will see the north Londoners seal a spot in the next phase of the competition with three games to spare.

Andre Villas-Boas is expected to rotate his squad for the match with the Portuguese coach trying to continue his sides fine start to the season, with a 2-0 win over Aston Villa on Sunday moving Spurs level on points with fourth-placed Manchester City in the Premier League table.

However, they will be facing a trip into the unknown tonight with Sheriff yet to face English opposition in their history. The Moldovan champions have found the net just once in their opening two European fixtures and will find it tough to break down a rock solid Tottenham side who are yet to concede.

Emmanuel Adebayor could make his first appearance of the season after being a surprise inclusion in the squad that flew to Moldova on Wednesday. The striker has struggled to regain his place in the team following the death of his brother and has been keeping fit by training with the reserves.

Winger Aaron Lennon could also make his first start of the season after coming off the bench against Villa last time out having recovered from a foot injury, and he could replace the in-form Andros Townsend who’s been left back in north London.

Paulinho and Kyle Walker has also been rested so Sandro and Kyle Naughton are likely to start, but Etienne Capoue, Younes Kaboul and Danny Rose remain out. Erik Lamela, Nacer Chadli and Jermaine Defoe are expected to start in attack. 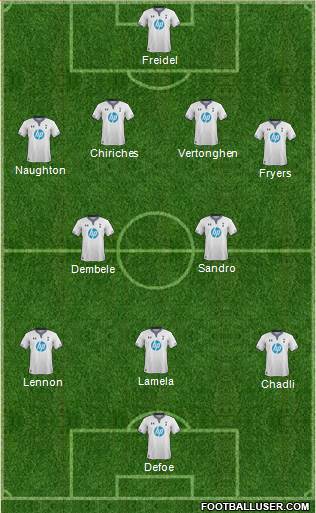 FC Sheriff 0-3 Tottenham: Despite fielding a weakened team, Spurs should have far too much for the European minnows.