Spurs head into the game sitting joint fourth in the Premier League but could be six points off the Gunners if they beat Crystal Palace on Saturday, so Andre Villas-Boas knows victory over Hull will be vital in staying in the hunt for the title.

The north Londoners warmed up for the game with a 2-0 over FC Sheriff to all-but confirm their qualification to knockout stages of the Europa League, and AVB fielded a weakened side so is expected to ring the chances this weekend.

Kyle Walker, Paulinho and Andros Townsend were left back in the capital in midweek so should all start against Hull while the likes of Michael Dawson, Gylfi Sigurdsson and Roberto Soldado could also come back in having been rested last time out.

Etienne Capoue, Danny Rose and Younes Kaboul are all still on the sidelines with injury, although the trio are not far away from making first team returns. Vlad Chiriches is likely to keep his place after a man of the match display against Sheriff so Jan Vertonghen could play at left back once again with Rose out. 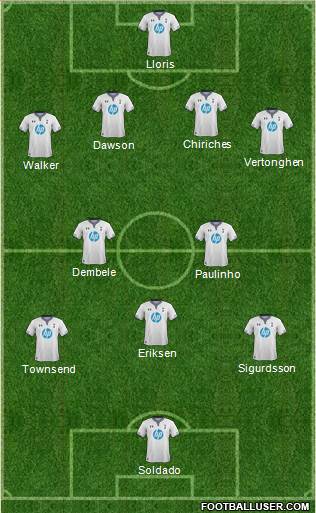 What do you think of our team? What would your starting eleven be?