Tottenham Hotspur take on Everton on Sunday afternoon hoping to close the gap on league leaders Arsenal. Here’s the team Andre Villas-Boas could go with:

Spurs head into the weekend’s action sitting fourth after last weeks narrow 1-0 win over Hull City and with Arsenal playing third-placed Liverpool on Saturday evening, they will be hoping to take advantage of two of their title rivals playing each other with a win at Goodison Park the following day.

Andre Villas-Boas made several changes to his side for Wednesday’s Capital One Cup clash with Hull so a number of first team regulars are expected to be recalled on Sunday.

Hugo Lloris will return in goal while Kyle Walker, Michael Dawson and Vlad Chiriches are also expected to start. Sandro could come in to midfield alongside Paulinho with Andros Townsend and Lewis Holtby restored in attack after sitting out the action in midweek.

Gylfi Sigurdsson will be hoping to retain his place after scoring a stunning goal against the Tigers while Roberto Soldado should expect to start after being rested last time out.

Younes Kaboul made a successful return to action after a long injury layoff but is unlikely to be asked to play a second game in four days. Etienne Capoue returned to the squad against Hull and could be on the bench again on Sunday but Danny Rose is still struggling with a toe injury.

Here’s the team AVB could go with: 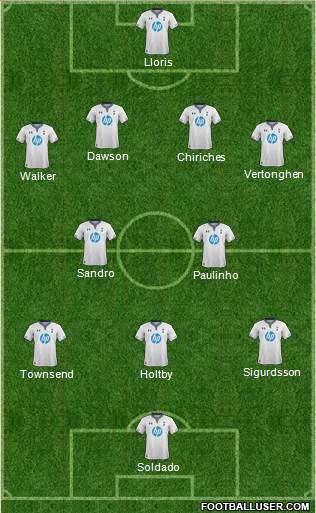