Spurs boss Andre Villas-Boas has confirmed that goalkeeper Hugo Lloris is back in full training after being knocked unconscious on Sunday but he’s likely to sit this game out with Brad Friedel given the nod in goal.

Midfielder Sandro won’t feature after being forced off against Everton with a hamstring injury so Mousa Dembele could be partnered by Etienne Capoue in the center of midfield with the Frenchman in line to make his first start in over two months having recovered from an ankle injury.

Winger Nacer Chadli is also missing after failing to recover from a hamstring injury that he picked up in the Capital One Cup clash with Hull City last week, and he joins Danny Rose and Zeki Fryers on the sidelines.

Kyle Naughton is a slight doubt but could start are left back if he can prove his fitness, while the likes of Aaron Lennon, Erik Lamela and Christian Eriksen are all expected to get run outs.

Here’s the team AVB could go with tonight: 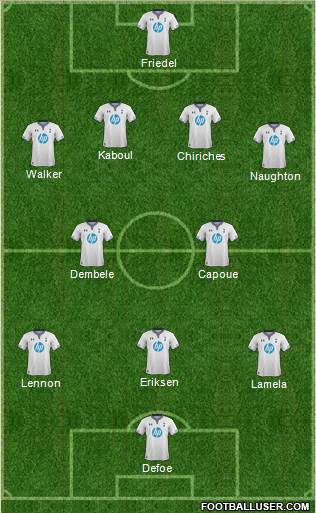 What do you think of our team? How would you line-up?