Tottenham Hotspur are in Norway to take on Tromso this evening looking to maintain their 100% record in teh Europa League this season. Here’s a preview.

Tottenham Hotspur are in Norway to take on Tromso this evening looking to maintain their 100% record in the Europa League this season.

Spurs head into the game off the back of Sunday’s 6-0 drubbing to Manchester City at the Etihad – a result that has seen speculation intensify over the future of manager Andre Villas-Boas.

However, while the north Londoners are struggling to click in the Premier League, they have been exceptional in Europe having already secured qualification to the knockout stages of the Europa League.

Tottenham have won all four of their games so far, scoring 9 goals and conceding just 1 along the way, so will secure top spot in Group K with another victory this evening.

They will face a Tromso side that have picked up just a single point so far and have scored just one goal, so AVB should be confident of getting back to winning ways ahead of Sunday’s crucial clash with Manchester United.

Villas-Boas is set to make changes as he’s left a number of first team regulars at home. Kyle Walker, Hugo Lloris, Paulinho, Jermain Defoe, Aaron Lennon, Sandro and Younes Kaboul have been rested ahead of the United game.

Christian Eriksen is sidelined for at least three more weeks with an ankle injury, Emmanuel Adebayor has a groin complaint while Harry Kane is ruled out with a back injury.

This leaves the door open for youngsters such as Ryan Fredericks, Kenneth McEvoy, Laste Dombaxe and Shaquile Coulthirst to get a taste of first team action. AVB is likely to name a strong starting eleven and introduce the youngsters from the bench as he looks to gain a morale-boosting win.

The home side are sweating on the fitness of Adnan Causevic who is struggling to overcome a groin complaint.

With the Norwegian outfit already unable to qualify, they are expected to field a number of fringe player with Marcus Sahlman and Hendrik Helmke among those likely to come in. 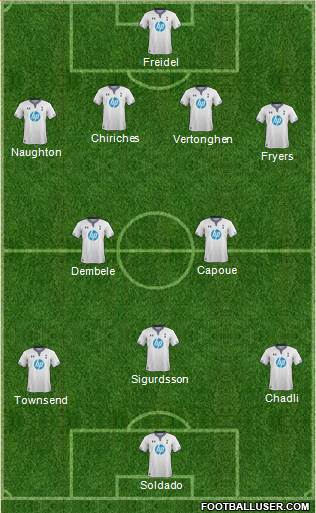 Gylfi Sigurdsson: The Icelandic international could be deployed in the ‘hole’ behind Roberto Soldado tonight and he’ll be relied upon to be the creative hub of the team. With Spurs struggling to score goals recently, Sigurdsson will be looked at to supply the bullets for Soldado.

Tromso 0-2 Tottenham: Despite making a number of changes, Spurs should have far too much for the home side to handle.

What team would you like to see play and what’s your predicted score? Share your views below.