Tottenham Hotspur take on Fulham at Craven Cottage on Wednesday night looking to close the gap on the top four. Here is team news and a predicted starting XI.

Tottenham Hotspur take on Fulham at Craven Cottage on Wednesday night looking to close the gap on the top four.

Spurs bounced back from their 6-0 thrashing by Manchester City to draw 2-2 with Manchester United on Sunday but haven’t won any of their last four league games so will be desperate to get back to winning ways tomorrow.

Boss Andre Villas-Boas gave TottenhamHotspur.com a team news update earlier today and confirmed the news that striker Emmanuel Adebayor has suffered a set-back after picking up a knee injury in training on Monday.  AVB told the clubs official website:

“We’ve had a setback with Ade who picked up a knee injury in yesterday’s training session,” explained Andre after training on Tuesday. “He’s the only player who will join the injury list.”

Adebayor joins Danny Rose on the treatment table with the defender continuing to struggle with a foot injury. Playmaker Christian Eriksen is the only other major injury absentee, with the Danish international set to miss at least another 4 weeks with an ankle injury.

Villas-Boas is expected to stick with the majority of the team that drew with United. Jan Vertonghen is expected to once again fill in at left-back and the impressive Vlad Chiriches likely to continue to partner Michael Dawson in defence.

Andros Townsend is pushing for a recall and may replace Nacer Chadli in attack while Roberto Soldado is expected to lead the line despite struggling for goals. Here is how Spurs could line-up: 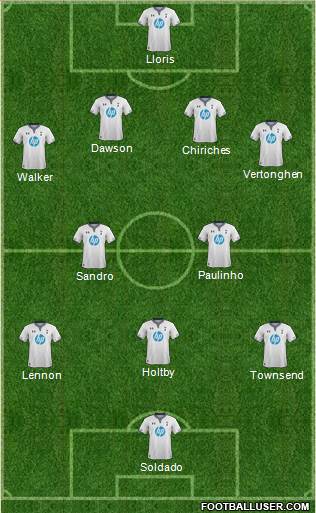