Tottenham Hotspur entertain Crystal Palace at White Hart Lane on Saturday afternoon looking to close in on the top four. Here is our predicted starting eleven:

Tottenham Hotspur entertain Crystal Palace at White Hart Lane on Saturday afternoon looking to close in on the top four.

Spurs were disappointing during last weeks 2-0 FA Cup defeat to Arsenal but Tim Sherwood is unlikely to tinker too much from the side that’s done him proud for the majority of the games since he’s been in charge.

The back five is expected to remain unchanged although Younes Kaboul could be pushing for a recall if he proves his fitness in training this week, but Jan Vertonghen remains out through injury.

Mousa Dembele is certain to start in the centre of the park with Paulinho out for a month, while Sandro is back in training and could come in if Sherwood feels he’s 100%. However, we think the Brazilian will be eased back into the action which could see Christian Eriksen start in the middle with Etienne Capoue seemingly out of favour.

Nabil Bentaleb did OK at the Emirates but is expected to make way which could see Andros Townsend make a comeback on the left side of midfield after returning to training last week.

Emmanuel Adebayor was disappointing against his former side last weekend but should retain his place alongside Roberto Soldado up front. 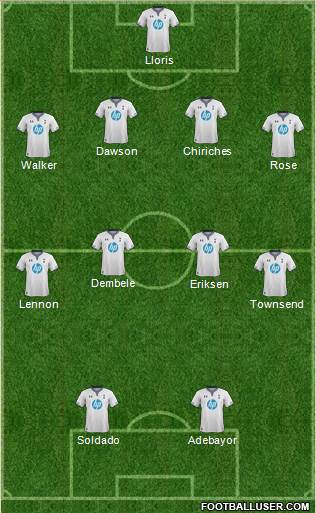