Tottenham Hotspur take on Norwich City on Sunday afternoon looking to close in on the top four of the Premier League. Here’s our predicted team for the game.

Tottenham Hotspur take on Norwich City on Sunday afternoon looking to close in on the top four of the Premier League.

Boss Tim Sherwood left a number of first team regulars in London for Thursday nights Europa League defeat to Dnipro so he’s expected to make several changes to his starting eleven this weekend.

Hugo Lloris was one player rested in midweek so the Frenchman will return in goal, while Kyle Walker will also come back in at right-back and could make up a back-four along with Danny Rose, Jan Vertonghen and Michael Dawson, although Younes Kaboul is also pushing for a start.

Mousa Dembele should come back in to the midfield in place of Etienne Capoue, and Aaron Lennon is likely to get the nod over Andros Townsend on the right after being rested last night.  Christian Eriksen was on the bench for the game so should regain his place while Emmanuel Adebayor is also expected to be restored to the starting eleven in place of Roberto Soldado.

However, Sandro remains out with a calf problem and he’s joined by Erik Lamela and Vlad Chiriches on the sidelines. 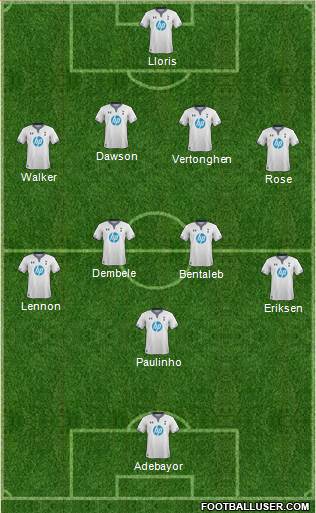 Spurs head into the weekend action sitting fifth but are just three points off fourth-placed Liverpool so will be hoping to capitalise on any slip ups from the Merseysiders.