Tottenham Hotspur will look to round-off a disappointing season with a win against Aston Villa on Sunday afternoon. Here’s our predicted line-up for the game.

Tottenham Hotspur will look to round-off the season with a win against Aston Villa on Sunday which will ensure qualification to the Europa League next season. Here’s our predicted line-up for the game.

Tim Sherwood has his fair share of injury worries to contend with as he’s set to be without as many as seven first team squad players for the final game of the campaign.

Younes Kaboul is suspended after being sent off against West Ham last week and with Jan Vertonghen still injured, Vlad Chiriches is expected to come in alongside Michael Dawson at the back. Kyle Walker remains out with a pelvic injury so Kyle Naughton will continue at right-back and Danny Rose should keep his place on the left side of the defence.

Mousa Dembele is still out with an ankle injury and he’s joined by Belgian team-mate Nacer Chadli on the sidelines after he picked up hip and groin injuries last week. The good news is that Etienne Capoue is back in the squad and could start in midfield alongside Paulinho.

With Andros Townsend and Erik Lamela unavailable, Sherwood is likely to stick with the same side he’s opted for in recent weeks, with Aaron Lennon, Christian Eriksen, Harry Kane and Emmanuel Adebayor making up the attack.

Here’s the side we think Tim will select on Sunday: 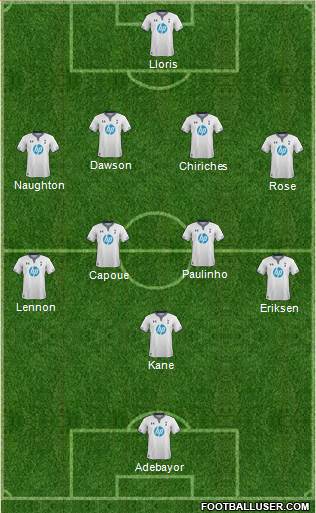 What team do you think Sherwood will go with? Share your suggestions below.